Kate Micucci (Chips)
Riki Lindhome (Ice Cream)
Chips and Ice Cream are characters that first appeared in their eponymous episode. They were cursed to stay on the head of Morty Rogers. Their previous occupations were as entertainers who worked with Morty Rogers, and now—as of the end of the episode—they are free thanks to the help of BMO, a fan of the sisters' plays. Their entire vocabulary consists of the words "chips" and "ice cream," respectively.

Chips and Ice Cream are identical in appearance, and when in possession on an individual they take on the color of that person. The two are cylindrical and rounded at the top with blue hats. When free from possession they are transparent, and take the form of a simplistic ghost, much like the ones seen in "Heat Signature."

The Chips and Ice Cream Show

The reveal during the transferring ritual

Finn's fed up but BMO has a plan 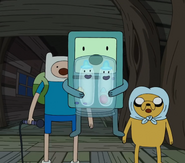