Chipmunks are reoccurring woodland critters found in the Land of Ooo. In "Bun Bun," a population of chipmunks live in a cave that becomes ruled by the Flame King. A chipmunk can be seen in "Storytelling" surrounding the Rite of Forest Justice. In "Sad Face," a chipmunk known as Goralina is an attraction in a circus. She was later freed by Jake's tail. In "Son of Rap Bear," one of cave chipmunks raps for Flame King. In "Always BMO Closing," BMO and Ice King run into a very overweight chipmunk, scaring him away in an attempt to make a sale.

The chipmunks in Adventure Time resemble ordinary woodland critters, despite living in a post-apocalyptic world. Their behavior is out of the ordinary, however, like many other animals in the show they can speak, and evident in "Storytelling," unite and rebel with other animals.[1][2] The chipmunks seen in Season 2 are designed without any appendages on their limbs and feature a white patch of fur on their heads and tails.[2] As of Season 7, they possess no white patches, and their fur patch color remains consistent throughout the entirety of their dorsal side.[1] 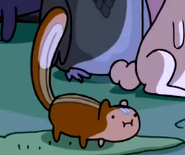 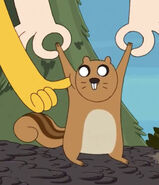 Retrieved from "https://adventuretime.fandom.com/wiki/Chipmunks?oldid=827836"
Community content is available under CC-BY-SA unless otherwise noted.