Alia Shawkat
Charlie is a pup and one of Jake and Lady Rainicorn's five children.

Charlie resides in an ancient pyramid in Egypt and travels to Ooo by growing to a massive size, but remaining constant in mass. By doing this, she becomes intangible, and easily walks through the ocean with her upper half out in space. She is heavily into mysticism and Tarot cards, which she uses to read the nature of others. In "Daddy-Daughter Card Wars," she uses one of Jake's bones and a lock of Lady's hair to read her own future, which depicts her going through some periods of confusion and sadness, but ultimately winding up wise in her 90s. She then fused with this future version of herself, gaining the wisdom to realize she was treating her father badly. Sometime after "Come Along With Me," she will have a hybrid son named Gibbon.

Like her father, Charlie has the body and face of an orange/yellow English Bulldog with large, characteristic eyes. She has patches of pastel colors on her stomach and the lower part of her body. She also has a light-blonde tail and mane with a single white, sharply pointed horn. Charlie has fairly light-orange freckles on her cheeks.

As an "adult," Charlie no longer has a green bottom or blue feet, now wearing clothes regularly. Her tail has also grown longer. In "Apple Wedding," she wears a blue necklace, pink one shoulder dress, and purple shoes. In "Ocarina," she is seen wearing a blue T-shirt that slightly resembles a dress. Her hair has also grown slightly longer compared to her last episode. In "Daddy-Daughter Card Wars," her hair is pulled back in a ponytail with a blue barrette clipped on to her hair. In "The Invitation," she wears a stained blue shirt and olive green shorts.

Charlie has inherited father's shape-shifting abilities and her mother's ability to fly, phase through objects, and teleport from one place to another. She can also transform into a super pup with her brothers and sisters.

Charlie can grow as large as she desires but still keeps her initial mass. As she grows, the density of her body becomes less, making her look invisible. She can grow so enormous that her body reaches outer space and can walk through the surface of Earth in seconds. She can also grow not only her body but also her clothes, bag or just anything on her. She is a skilled Tarot card reader, and has an understanding of how to read the future and see a person's essential nature through mystic rituals. Her abilities were so great, she was able to destroy the part of Jake's ultra competitive side that was keeping him from enjoying Card Wars. These skills apparently translate to playing Card Wars as well.

Charlie in the promo art of "Jake the Dad" 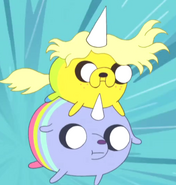