Ghost Princess (formerly)
Clarence (formerly)
Boilbee
Spirit Waves
Ghosts
Muscular Ghosts
The Hamburger Hills Cemetery is the main setting of the episode "Ghost Princess." It appears to have been established long before the Mushroom War since it has ruined buildings and other modern-day objects in it, including stairs and mausoleums, including Clarence's. Its original name was "Hamburger Hills Cemetery," but it is unlikely that the residents still call it that. It is inhabited by many Ghosts and seemingly no other undead creatures. All the gravestones are clear enough to see through them, and have unusual colors, like orange and red. It also appears to have a volcano inside or near it. There is also a section of the cemetery that is less cared for, without the crystal-like tombstones where the "ne'er-do-well ghosts hang out." 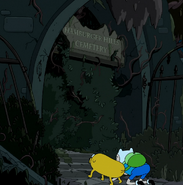 Add a photo to this gallery
Retrieved from "https://adventuretime.fandom.com/wiki/Cemetery?oldid=840761"
Community content is available under CC-BY-SA unless otherwise noted.