Hynden Walch ("Susan Strong")
Ashly Burch ("Dark Purple")
Celina[1] is a member of the Hyooman tribe first seen in the episode "Susan Strong." So far, other than Susan and Sally, she is the only named member of the tribe. Her first major appearance was in "Dark Purple." In "The Music Hole," Celina is seen as a back-up dancer for Susan's song.

Celina is a humanoid who wears a panda hat with artificial long Orange human hair.[2] Concealed underneath the hat is a blue fish-like head with fins sprouting from it. She wears a tattered brown one-shouldered dress, a golden belt, and a golden armband on each arm.

After Susan had reclaimed Beautopia, her hair no longer hangs down from her hat and her hat is also slightly smaller. She wears a tattered red dress with a blue belt, a golden armband on her left arm and a white band tied on her right leg.

Celina was first seen in "Susan Strong" and later in "Beautopia" among the Hyooman tribe.

When one of the delivery drones of the Super Porp Factory kidnapped a baby in the Hyooman Tribe, she, Susan, and Sally decided to infiltrate the factory in order to save the baby. After successfully entering the factory, the group wandered around the Porp Fountain and heard the cries of the kidnapped baby through a vent. She and Sally decided to follow the cries of the baby by climbing into the vent. Later, when Susan was rendered helpless by a humongous dog in a room filled with Porp, she and Sally defeated the dog by jumping down from a hole nearby to attack and saved Susan. After Susan defeated Cheryl and retrieved the baby, she and her friends destroyed the factory along with the rest of the Super Porp People.

Despite being the skinniest among her friends, Celina possesses incredible raw strength comparable to that of Susan and Sally, as demonstrated in "Dark Purple," when she kicked the Dog in the bottom with both of her legs, immediately rendering it helpless. 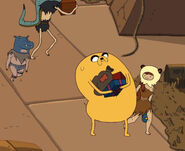