Ghost Lady
The Castle is the main setting in the episode "The Creeps." Its only known inhabitant is the ghost of Shoko who appeared only to Finn (her reincarnation).

The Castle appears to be very large, and more mansion-like in appearance than castle-like. It is well furnished with refined-looking furniture and has multiple floors.

On the first floor, there is a huge foyer, dining hall, and an unseen bathroom. It is likely that there are other, unseen rooms that were unused in the episode. In the foyer there are many paintings, a few couches, and a piano, as well as a series of curtains and hanging chandeliers. There are many wooden lion heads mounted high on the wall with the entry, as well as many ornate wooden columns. There are a few tables and lamps, and a vase as well. This is all placed upon rugs of different colors. At the bottom of either side of the stairs railing there are wooden owl statues. The dining room has no food in it, paintings and a fireplace. There are quite a few sets of animals horns mounted on the wall. The one part of the bathroom that is seen shows it has a checkered floor as well as a sink and mirror.

The downstairs region of the house is extremely dark so most of it is unseen. Based on the view from the stairs, it is likely that it is less finely furnished and cared for than the rest of the house.

In the seen area of the upstairs there is a study, complete with a few bookshelves and a writing desk. This is the room that Shoko makes her appearance. Finn breaks through the wall of the study into another room which has a lounge chair, a piano, and two paintings with crows. The Ghost Lady (Shoko) causes the crows to fly out of both paintings (it is also possible the house itself is just haunted, or that Finn is totally delusional) and the floorboards start to break upwards at Finn. He then runs into the only adjoined room which leads to a spiral staircase. At the top of the staircase, there is a glass dome, revealing that the castle overlooks the ocean. This is where Jake reveals to Finn that it was an elaborate prank—or at least most of it. 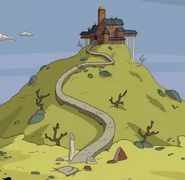 The castle seen in "The Vault"

The Destiny Gang's castle in Finn the Human.
Community content is available under CC-BY-SA unless otherwise noted.
Advertisement