Cartoon Network: Superstar Soccer is a crossover game featuring several characters from Cartoon Network shows such as Ben 10: Omniverse, The Amazing World of Gumball, and Adventure Time. It costs $2.99 USD on the Amazon App Store, iTunes, and Google Play stores. The computer version requires Unity Web Player to be played.

You control your team using the arrow keys and the Z and X buttons. You press the X button to switch/pass to other characters, and you use the Z button to shoot. The goal of the game is to try and win three games in a row. There is also an online multiplayer mode. You can tackle other players on the field and steal the ball from them by pressing the Z button. 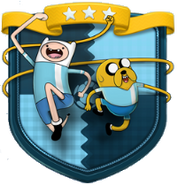