"Card Wars" is the fourteenth episode in the fourth season of Adventure Time. It's the ninety-second episode overall.

The episode starts at the Tree Fort with Finn eating sandwiches and drinking juice on the couch. Jake soon walks in with a box and sighs obnoxiously to get Finn's attention. Finn asks what is in the box, and Jake eventually explains that the box contains the cards to play Card Wars. Jake explains that Lady Rainicorn does not want to play with him anymore because he always beats her. Finn tells Jake that he wants to play, and they begin setting up a table with snacks as BMO walks by. Jake asks if BMO wants to play with them, but it ominously replies that it does "not play such games... with Jake."

Shrugging off BMO's cryptic words, Finn and Jake decide the stakes: the winner will be a "cool guy," and the loser will be a "dweeb." Jake fills two cups with soda, but adds coffee grounds, beetle butter, grape jelly, kimchi, and Ham Chunk Juice to one. Finn laments the loss of perfectly good soda, but Jake quickly writes labels on the cups and explains that this is part of the stakes; the winner will get the normal "cool guy" cup, and the loser must drink from the gross "dweeb" cup. After Finn agrees, Jake explains the rules of Card Wars, which takes two hours. Jake then sets up his kingdom and prepares to start the game, noticing Finn has fallen asleep from the long-winded explanation of the rules. Finn says to start anyway despite Jake's protests, and the two begin playing.

Both players "floop" their land cards, and Jake reminds Finn to keep his hand hidden to avoid giving his opponent a strategic advantage. He then begins his turn by activating "The Silo of Truth," which shows him all of the cards in Finn's hand. Jake mocks Finn's hand, but takes one of Finn's cards, "Cerebral Blood Storm," which magically flies into his hand. Entering his battle phase, Jake proceeds to summon his "Husker Knights" for an attack on Finn's "Schoolhouse," backed by his stolen "Cerebral Blood Storm." When prompted to defend, Finn asks if his "Cool Dog" and "Ancient Scholar" can defend against the knights, which Jake laughs off as obviously impossible.

Finn then floops "The Pig"; Jake scoffs at this, telling Finn that creatures must be "activated" to attack or defend—not flooped. However, Finn notes that the pig can be flooped, activating its effect which, to Jake's horror, results in the pig marching into his kingdom and eating his corn fields. Since the "Husker Knights" are powered by corn fields, the pig inadvertently causes them to fall apart, negating Jake's attack. Furthermore, Jake's "Cerebral Blood Storm" only destroys his own troops, since Finn is not attacking. Jake is upset at Finn's progress, but Finn explains that it is "just logic"—that pigs eat corn. Unable to argue with the results, Jake grimly announces the end of his turn.

Finn seems uncertain how to proceed with the beginning of his turn, and Jake tells him that he needs to discard a card from his hand and draw a new one. As Finn does so, Jake mocks him as "a babe in the woods," warning that Finn's "beginner's luck ends this round." However, Finn surprises his friend by adding two new buildings to his kingdom: "Spirit Tower" and "The Cave of Solitude." In his own battle phase, Finn sends his pig to "The Cave of Solitude" for a nap and sends his "Ancient Scholar" to study in the "Schoolhouse." A bewildered Jake asks if Finn was planning to attack, but Finn explains that he will attack on another turn.

As Finn's turn ends, Jake gleefully declares that fate has turned in his favor, declaring his intent to destroy Finn's pig and regain the advantage on his turn. He plays "Field of Nightmares" to summon a legion of "Earlings" to "scare [Finn's] pig to death"; Finn points out that they cannot, as they are unable to enter "The Cave of Solitude." Jake attempts to cast "Teleport" to bring the pig out, but Finn notes that "Teleport" only works on the caster's creatures. Jake admits that Finn is correct. Confident in his position, Finn taunts an increasingly flustered Jake, declaring that he is the "cool guy."

The taunt, however, gives Jake an idea; he excitedly floops his "Volcano" despite Finn's shocked protests. Although the resulting lava flow annihilates most of Jake's own kingdom, a stray rock destroys Finn's cave, along with the pig inside it. Happy that he finally killed the pig, Jake plays "Reclaim Landscape" to restore his kingdom to its original state, reviving his "Husker Knights" in the process. Next, Jake moves his "Useless Swamp" card to reveal "The Immortal Maize Walker" underneath, a powerful-looking spirit creature that does triple damage if its controller has cornfields in their kingdom.

With a triumphant scream of "I told you cornfields are awesome!" Jake prepares to attack, only for Finn's "Ancient Scholar" to emerge from the undamaged "Schoolhouse." Finn explains that his scholar had been studying a "raise the dead" ability, which he uses to resurrect his pig. Jake looks on in frustration as Finn floops his pig once more, devastating Jake's knights by destroying his cornfields. Finn then notices that his "Spirit Tower" is "doing a thing" as it brings Jake's "Immortal Maize Walker" over to Finn's side. Aghast at the "ganking" of his Maize Walker, Jake walks away from the table, grumbling to himself in frustration. A worried Finn suggests a break, only for Jake to grow to a huge size and dangle Finn off his finger, ordering him to play the game. After recalling BMO's statement that it does not play Card Wars with Jake, Finn says he needs to go to the bathroom (or the "boy's style room") so he can get away from the table and find BMO.

After dropping on Finn's head with its "BMO Chop" attack, BMO explains that the last time it beat Jake in Card Wars, Jake did not talk to it for a month. Finn realizes that his well-intentioned attempt to cheer Jake up is only making things worse, and BMO suggests that he will have to "take a dive." As Jake pulls Finn from all the way upstairs back to the table—again demanding that he play the game—Finn decides to intentionally lose. He declares that he is about to use his ultimate attack, to which Jake replies that he still has his "Wandering Bald Man." However, instead of sending "The Immortal Maize Walker" to finish the game, he chooses to send his pig into battle. The Pig moves into a muddy section of Jake's kingdom to attack his last creature, a "Wandering Bald Man," and a pathetic but suspenseful battle ensues.

To both Finn and Jake's dismay, the pig wins the battle, and a scowling Jake prepares to admit defeat. However, as the pig begins to return to Finn's side, it gets stuck in the mud and falls under Jake's control. This causes Jake to regain his excitement; since pigs cannot leave mud landscapes once they enter, he gleefully declares "the pig is mine!" He then plays another "Reclaim Landscape" card to restore his cornfields, before summoning "Archer Dan" to destroy all of Finn's buildings with corn-tipped arrows. For his final move, Jake summons a large, reaper-like creature that takes control of all of Finn's creatures. Jake triumphantly explains that he has won, since Finn has no creatures left.

Finn congratulates Jake even as the dog rubs his face in the game board and hands over the "dweeb" cup. After taking a sip, Finn claims that it is good and asks if Jake wants to try it, and a surprised Jake obliges. He then immediately spits it out because it is disgusting, and Finn jokingly calls him a dweeb. The scene then closes with the two of them still sipping the gross drink together, while BMO shakes its head at them in disappointment. 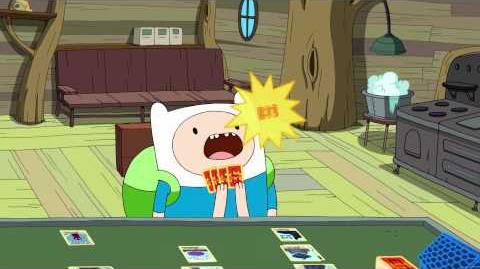 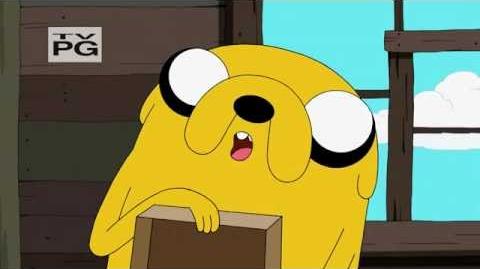 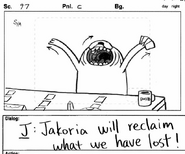 A demon card kind of familiar in the Nightosphere

The card right side up

Jake uses The Silo of Truth to take Finn's card.

Jake uses The Silo of Truth.

"Uh... Can my Cool Dog and Ancient Scholar defeat your Husker Knights?" 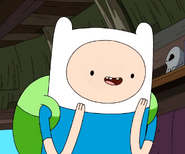 "I'll attack on a different turn."