The Candy Tavern is a bar in the back alleys of the Candy Kingdom. It was formerly run by Charlie before Dirt Beer Guy assumed management some time before "Abstract." In its former management, this is where thugs and ne'er-do-wells of the Kingdom would hang out. In "Apple Thief," Finn, Jake, and Tree Trunks come here searching for stolen apples and meet Jaybird and his gang in the alley behind the tavern. Near it is the gang's hideout, where stolen diamonds are kept.

Before he was a hero, Jake used to come to the tavern, steal purses, and hock bikes at a building in the neighborhood. Finn wonders if Princess Bubblegum knows about this place. It is likely that she does, as seen in "Bad Timing" when Princess Bubblegum quickly intercepted Lumpy Space Princess after misusing the time travel machine. Given her age and comprehensive security network, she likely accepts the minor trespasses of the patrons there by not interfering; she even partakes of a drink after Lumpy Space Princess leaves.

Notable changes to the establishment occur once Dirt Beer Guy takes management. The bar is likely now called Dirt Beer Guy's Tavern, as indicated by both the sign formerly reading "CANDY TAVERN" being changed to read "DBG," as well as Simon Petrikov referring to it as such in "Obsidian." Under its new management, Dirt Beer Guy's Tavern appears to be kept in much better condition. Its once broken windows are repaired, the walls and roof have been refurbished, with said roof being decorated with trees and grass and flowers, and it is now seemingly visited primarily by members of the general public such as Lollipop Girl and Wafer Guy instead of the thugs and ne'er-do-wells that frequented before. Charlie has kept his job as bartender, with him and Dirt Beer Guy possibly alternating shifts. Smudge, a member of Jaybird's gang, begins working as a bouncer at some point.[1] 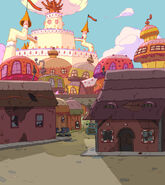 View of the back alleys in which the tavern is located