Luke Pearson
Somvilay Xayaphone
"Candy Streets" is the twenty-fifth episode in the fifth season of Adventure Time. It's the one hundred and twenty-ninth episode overall.

When Lumpy Space Princess reports something being taken from her without revealing what, Finn and Jake investigate the Candy Kingdom for the object and culprit.

When the two arrive at room 303, they bust down the door and quickly investigate. They find only bags. Finn then notices a drug store across the street. He also finds what appears to be blood on the floor and asks BMO to find out whose it is. Finn guesses the murderer must have bought a mini adhesive bandage afterwards, so Jake turns into a car and the two burst through the window. In the Candy Drugstore, Ann is suspiciously selling bandages to a candy person. Finn introduces himself and Jake, who shapeshifts into a police badge and asks if anyone suspicious bought bandages today. She says she cannot remember all the customers. Finn starts to leave, but Ann then tells them about this person who had a nosebleed. She says his name was Pete Sassafras and that he is catching an 11:27 train at platform five in the Candy Kingdom Station. Finn and Jake leave to find Pete.

At the train station, they find platform five and look for suspicious people. They see a "nasty tranch" wearing a "skeezy" trench coat about to board the train. They go after him only to be stopped by Blueberry Cops, who try to arrest them for boarding the train without a ticket. Jake explains what they are doing. The cop holding Jake licks him and says he tastes like police, so they let them off the hook. Jake turns into a car once more and swallows up Finn so he can drive. They take a shortcut through the woods to catch up with the train, crashing into trees, deer, and even going through a river along the way, but they catch up. The two enter the back of the train and find Pete, acting suspicious as they question him. Jake then turns into handcuffs, and they arrest Pete.

In the Candy Dungeon, Finn and Jake are standing near the captured Pete. He claims he does not know anything. They ask him a few questions, but all they discover is that Pete does not even know who Lumpy Space Princess is. Pete demands a lawyer, so Jake stretches his arm into one. Pete is pleased until Finn and Jake laugh, revealing the joke. After some time, the two leave to get some donuts.

Outside, Finn tosses Jake, who is in the form of a car, a bag of donuts with a cup of coffee inside. They talk about the case and think about becoming professional detectives when BMO finds them and tells them about the blood. It says it found out it was not blood, but tomato sauce, and then Finn begins to piece together the puzzle. He deduces that Lumpy Space Princess was not saying "Pete Sassafras," but actually "Pizza Sassy's," a pizza parlor. Finn and Jake rush to the parlor and ask an employee for the pizza delivery guy (called Pete), but they are told that Pete is out delivering pizzas. They think LSP is in danger, so Finn calls Princess Bubblegum to tell her to add Banana Guards outside Lumpy Space Princess's hospital, but she tells him that Lumpy Space Princess has gone back to her hotel room. Finn and Jake hurry to the hotel, panicking when they see Pete's pizza delivery car parked out front. 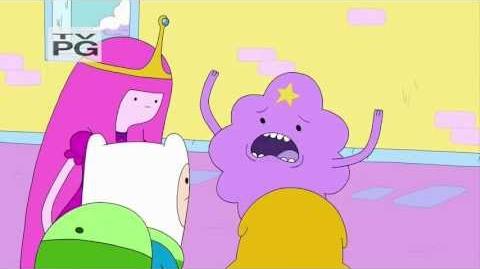 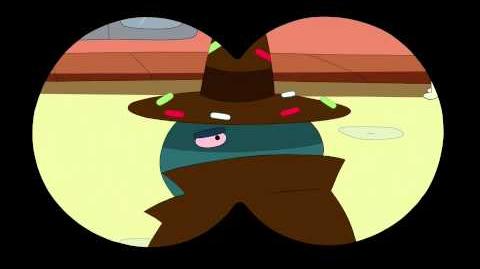 Snail in cage on top

Finn and Jake looking for clues 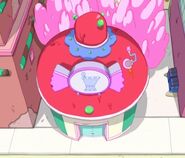 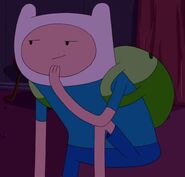 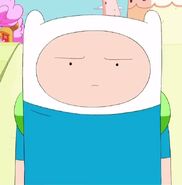 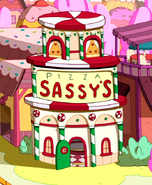