Tom Kenny
Chocolate Bar Guy is one of the suspects in the episode "Mystery Train." He is part of the larger group of Candy People who were simultaneously "murdered" in the boxcar. He had a travel dictionary which Finn used as a clue because it had the words "rid," "guests," and "at once" circled on separate pages. He is a three-pieced chocolate bar and appears to be an athlete of some sort.

Two other chocolate bars also appear in "Slumber Party Panic," but with different designs. The first one's eyes are a tad larger and wears high-up blue polka-dotted pants and a blue party hat. At one point, the Snail is seen sitting on his head. The other one was seen when everyone was cheering for the slumber party. His wrapper is up to his neck. He makes a minor appearence in the episode, "Root Beer Guy," as one of Root Beer Guy's fellow employees, and Gumdrop Guy's friend. He can be seen smoking a pipe that emitted bubbles. In this episode, he wore a business suit and a tie.

In "Ricardio the Heart Guy," he appears in the crowd, dancing.

In "Too Young," a candy person uses him like a board to slide down some stairs.

In "Mortal Recoil," he appears in the hospital worrying about Princess Bubblegum.

He is also briefly mentioned in the "Candy Kingdom Song." 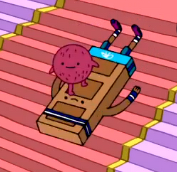 Add a photo to this gallery
Retrieved from "https://adventuretime.fandom.com/wiki/Candy_Person_53?oldid=853385"
Community content is available under CC-BY-SA unless otherwise noted.