Dee Bradley Baker
Mr. Cupcake is a frequently recurring candy person who lives in the Candy Kingdom. It was confirmed in "The Invitation" that he is in a romantic relationship with Chocoberry. He has previously acted as a romantic rival to Jake by occasionally flirting with Lady Rainicorn.

He debuts in "Slumber Party Panic," where Chocoberry dares him to take off his wrapper, revealing that he is chocolate. He is most likely friends with Finn and Jake, because he was at their party in "Evicted!" In "Video Makers," Mr. Cupcake is asked by Jake to play the role of "Todd Johnson" in the movie he and Finn were making. He is cast opposite of Lady Rainicorn, who he starts to flex in front of. When Jake voices his disapproval, he and Mr. Cupcake get into a physical confrontation. He appears once again in "Hug Wolf" as one of the candy people who were hugged by Finn. Mr. Cupcake also appears in "You Made Me" when Princess Bubblegum calls for a Candy Kingdom meeting. She asks him if he would live with Lemongrab, resulting in Mr. Cupcake breaking his own arm instead of living with Lemongrab. He was deleted by the Glitch during the events of "A Glitch is a Glitch."

In "All the Little People," the little Mr. Cupcake is seen fighting with the little Jake over Lady Rainicorn's love. In "Time Sandwich," Jake has an imaginary conversation with Mr. Cupcake where they get over their romantic rivalry. Jake is able to use the sadness of the conversation to get through Magic Man's molasses bubble. In "The Dark Cloud," Mr. Cupcake is one of the candy people who charges into battle against the Vampire King, wielding a small sword. In "The Invitation," he is the first candy person to greet the human transport as it rises out of the ocean. He is "neutralized" by the transport which then makes its way towards the Candy Kingdom. In "Hero Heart" he is seen in his pure candy form, but is reverted back to normal at the end of "Skyhooks II."

Mr. Cupcake appears to be physically fit. He has tiny white eyes, a brown mustache, a pink nose, orange arms and legs, and brown eyebrows. He's covered with vanilla frosting and has a few blue sprinkles on top of him. He wears only a blue foil wrapper, which covers his chocolate body.

In his pure elemental form, he is completely made of candy and has a bright green head, a blue body, pink arms, and purple eyes.

Mr.Cupcake as he appears in "What Have You Done?" 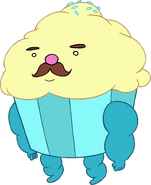 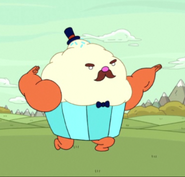 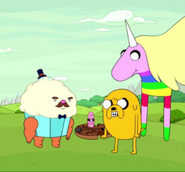 Mr. Cupcake in "The Suitor"