Jack Pendarvis
Dirt Beer Guy (formerly Root Beer Guy) is a Candy Person later revived as a mix of mostly plant and his remaining root beer substance. He appeared in the opening sequence beside Candy Person 22. In "Susan Strong," he wore a witch's hat on his straw in preparation for the Hyoomans' attack. In "No One Can Hear You," the Stag licked him right before licking a Banana Guard. In "Hug Wolf," he was one of the angry villagers.

In "Root Beer Guy," he was revealed to be a telemarketer who was working on a mystery novel. He witnessed Finn and Jake kidnapping Princess Bubblegum and tried to catch them, only to learn it was Princess Bubblegum who set up the scenario to test the Banana Guards' security capabilities. For solving the crime, he was made Captain of the Banana Guards. He formally appeared in this role for the first time as "Captain Root Beer Guy" in "Rattleballs."

He made a cameo in the crowd at the rap battle in "Billy's Bucket List."

In the promotional art for "James II," he was shown on vacation with Cherry Cream Soda, explaining why the Banana Guards were their usual incompetent, ineffective selves while dealing with James and his clones.

He dies off-screen in the episode "Something Big," due to an act of heroism. The episode itself is dedicated in his memory.

In "Cherry Cream Soda," he was resurrected from lightning and an iron bar as a mix of plant and some remains of candy. His name is now "Dirt Beer Guy". His new job after being revived from the dead is running the Candy Tavern, as revealed in "Abstract".

Prior to his death and resurrection, Root Beer Guy looked like a generic root beer float, with a face full of root beer and vanilla ice cream on his head. A drinking straw protrudes from the ice cream. His face was surrounded by glass, and originally he wore a red suit with red- and white-striped arms and legs similar to the drinking straw. As of "Root Beer Guy" his face and body remained the same, but his arms and legs are solid red. Later in the episode after becoming Captain of the Banana Guard he wore a blue policeman's uniform which included a necktie and hat with a badge on it.

When he was resurrected in "Cherry Cream Soda," Root Beer Guy no longer has a head filled with root beer. Instead, his head is a mason jar filled with sandy dirt and his remaining root beer and his body is composed of soil. In addition to the new appearance, he now possesses super-human strength and the ability to create plants at will. He also has a plant sticking out of his head, replacing his straw.

Root Beer Guy is shown to have a keen, analytical mind and deductive capabilities. He is a fan of detective and crime stories. He has a no-nonsense, straight-to-the-point demeanor, emulating the hard-boiled detectives he liked to read about. He has a tendency towards obsessive-compulsiveness, due to this he could be oblivious to others' feelings, such as his wife's. He was depressed and anxious for much of his solo episode, reflected in his dissatisfaction in his job and inability to finish his detective novel but gradually became more active and brave as he investigated Princess Bubblegum's "kidnapping." At episode's end, he was shown to have become a happier person by taking action, had reinvigorated his relationship with his wife, and given up his fantasy life in favor of a real adventure as chief of the Banana Guards.

He likes to say "Bingo, Bango" when fortune worked in his favor, much like his character Joe Milkshake. Joe was clearly a self-insert of Root Beer Guy, and his fictional life is the life of excitement Root Beer Guy craved, as he was dissatisfied with his own humdrum existence. This was likely why, when he got his new job, he threw away his typewriter. 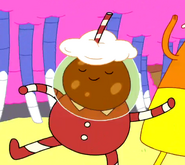 Root Beer Guy in "The Enchiridion!"

"I came back for HER"