Maria Bamford[1]
Niki Yang ("as of The Pajama War")
Chocoberry is a strawberry covered with chocolate who lives in the Candy Kingdom. She is one of the more important and recurring members of the Candy People. She is in a romantic relationship with Mr. Cupcake confirmed in "The Invitation." According to the storyboard of the episode "Slumber Party Panic," she is not actually a candy person and was imported from another kingdom, which might explain her thick French accent.[2]

In "Slumber Party Panic," she dares Mr. Cupcake to take off his wrapper, revealing that he is chocolate, and she is the first one seen eating the Candy Zombies' guts. In "Five Short Graybles" she sung the song "These Lumps" during a talent show, along with Gumdrop Lass 1, Gumdrop Lass 2, Lollipop Girl, and a chocolate covered banana girl. She then appeared in "You Made Me" when Lemongrab was watching her sleep. In "A Glitch is a Glitch," she disappears due to the Glitch.

In "The Pajama War" she claims to be able to communicate with spirits, and falsely confirms the deaths of Finn and Princess Bubblegum, leading to the brief collapse of the kingdom until Bubblegum's return. In "The Invitation," she watches the human transport ship emerge from the ocean and head towards the Candy Kingdom. In "Skyhooks II," she has been transformed into her pure candy form by Princess Bubblegum, but is restored by the end of the episode along with everybody else.

Chocoberry is a strawberry with four leaves sticking on the top, her stem in the middle of her head. Her head is covered with melted chocolate until her chest, and she wears pink sandals with long knee high socks.

In her pure elemental form, the chocolate reaches almost to the bottom of her body. She also has a topping of what looks like caramel, her stem is a much lighter shade of green, and her eyes are bright purple. 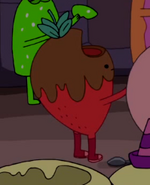 Chocoberry giving Young Princess Bubblegum some flesh of her own