"The Music Hole"
Uncle Chewy is one of the Candy Zombies that Princess Bubblegum and Finn raise from the dead in "Slumber Party Panic." He makes cameos in other episodes.

Uncle Chewy is a cylindrical blue-green Candy Person with light-blue frosting as his head. He has two teeth sticking out of his mouth when it is open. He has chocolate cubes sticking out of the frosting on top of his head and on his body, which are aligned to look like buttons.

He first appears in the episode "Slumber Party Panic" as a Candy Zombie. Princess Bubblegum uses her decorpsinator serum to cure him at the end of the episode.

He is one of the passengers in "Mystery Train," and attends Finn's birthday party after the train falls.

In "Mortal Recoil," he appears in the hospital worrying about Princess Bubblegum.

In "Too Young," he is in the background while Lemongrab is eating dirt. Later, he appears in the dungeon with other candy people.

He shows up again in "From Bad to Worse" once again as a Candy Zombie. Lumpy Space Princess strikes him with a hammer. 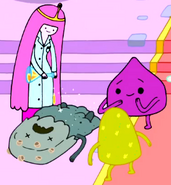 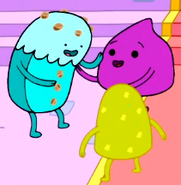