Kent Osborne
Green Gumdrop Guy is a Candy Person who first appeared in the episode "What Have You Done?." He was one of the people who fell victim to Ice King's "it's snowing" prank. In "Mystery Train," Colonel Candy Corn explained that he could have had one enemy on the train, but couldn't finish since he was "killed." This made Finn wonder who this person could have been, and Green Gumdrop Dude said that it could be him, since Finn was saying "it could be anyone." This made Finn believe that the murderer was him, and that he said that so he can get away with the murder. He was "killed" after this happened. He is seen at the end of the episode with cake in his hands, walking with Dr. Donut.

He had no official name until he was mentioned in the "Candy Kingdom Song." He was mentioned as being in-between the Royal Tart Toter and Grape Popsicle Guy.

He is green, hence his name, and has light-green sparks on parts of his body. His skeleton looks a little like a human's skeleton, but with an oddly shaped head and abnormally wide ribs.

Sitting near the Gumdrop Lasses 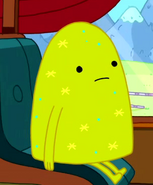