Very little is known about CMO. One first appears as a cameo in the episode "Puhoy." Later, in "Be More," many CMOs are shown among the MO society in the lower living levels of MO Co., suggesting it is a very common type of MO, and a single CMO is seen functioning as part of Moe's entourage of assistants in his living quarters.

CMO is similar to BMO, but is smaller, gray-to-beige in color, is more of a cube instead of a rectangular prism as shown in "Be More," and with only a slot for an optical disc and a black aperture of some unknown function below its screen, instead of BMO's several buttons and controller port. CMO also has a similar face/screen to BMO's, a trait common to the vast majority of members of the MO series. Due to its cheery attitude, CMO could stand for something like "Cheer More". Thinking phonetically, it could stand for "See More", as they are shown taking equipment to Moe - since Moe may not be able to properly see his surroundings, they bring items to him, helping him "See More". 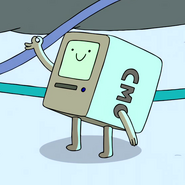