"Come Along With Me"
Butt Chest was the mystery reward that Finn and Flame Princess were trying the entire episode of "Vault of Bones" to get. Once Flame Princess unlocked the chest, it opened its eyes and winked at her.

At first, the Butt Chest appears to be a normal chest. Once opened, it is revealed that it’s a blue butt with one eye on either cheek. 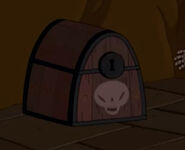