Cole Sanchez and Rebecca Sugar
"Burning Low" is the sixteenth episode in the fourth season of Adventure Time.

Princess Bubblegum tries to warn Finn why he can't hang out with Flame Princess anymore.

Finn didn't know if the hug was okay and asks Jake for tips. Jake's advice is to "let things take their natural path" and he explains some "junk" about dating. He creates "tiers" or a set of stairs with his arm and then explains that Finn is "at Tier 1, which is hugging, but pretty soon, you'll be at Tier 2, which is smoochin'." Jake then explains about tiers 5 and 8, using references that would apply only to Lady Rainicorn, such as "touching her horn for the very first time." When Finn points out Tier 15, Jake tells him to "stay away from that." He then tells Finn that he needs a shower because he smells. The two enter the treehouse, to see Princess Bubblegum has broken in to collect taxes. Finn then tells Princess Bubblegum to "not inhale" while he goes up a ladder to take a shower. Jake then reveals in an outburst to Princess Bubblegum that he's hanging out with Flame Princess. Princess Bubblegum is distraught from this, and quickly runs-off, forgetting the taxes. Jake is confused, but is interupted by a video chat with President Porpoise. The next day, as Finn is going to leave to hang-out with Flame Princess, he is stopped when Princess Bubblegum is standing in the doorway, causing Finn to shriek in surprise. She then attempts to explain to the duo why Finn can't see Flame Princess, but in the process, Finn leaves and Jake falls asleep. Princess Bubblegum then thinks that Jake understands what she said, but he wasn't listening to Princess Bubblegum and then thinks that she's really jealous of Finn and Flame Princess.

The two rush over to Flame Princess's new home, where Finn is reciting his poem to Flame Princess, but midway through, it gets burned to ashes, which causes the two to laugh, and afterward, kiss. Flame Princess then burns very brightly, explodes, and starts burning a hole through the Earth's crust. Finn (who appears to have been injured due to the kiss because his lips and parts of his face are burned) grabs one of Jake's arms, ties it around himself, and jumps into the hole after Flame Princess. Jakes struggles with the weight and falls on the hole, sealing it. Princess Bubblegum says that if Jake is depriving Flame Princess of oxygen for 24.8 seconds, she will burn out, which will stop the process. Finn reaches Flame Princess and sees that she has passed out and turned a very light shade of blue. Finn (struggling to breathe) says that he needs her "to be okay." He kisses her and gives her air, which awakens, rekindles, and stablizes her, though it causes Finn to pass out from the lack of air. Jake pulls the two up. Finn (who appears to be even more burned) awakens and asks Flame Princess if she is okay. Finn then kisses a rock, and holds it out to Flame Princess who also kisses the rock to symbolize them "kissing." The two walk off, and as this happens Princess Bubblegum sighs sadly and whispers "Oh, Finn." She turns around and sees Jake staring at her with a grin and he says "Jeeealous?", to which she replies, "Shut up." 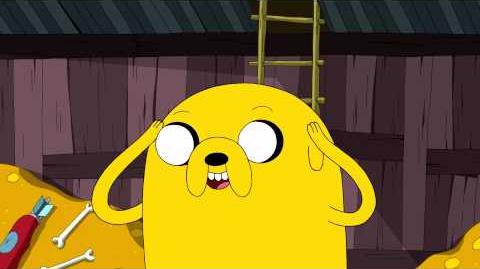 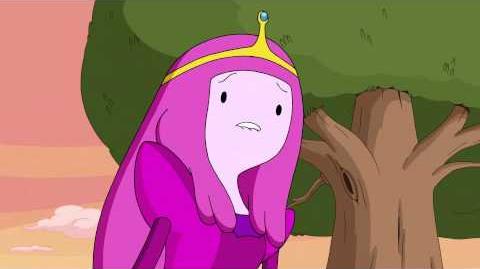 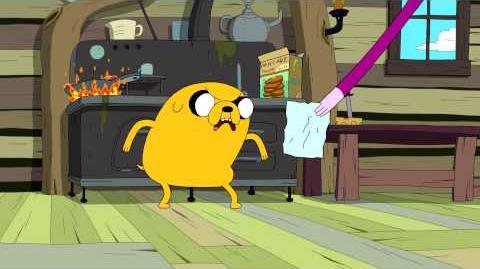 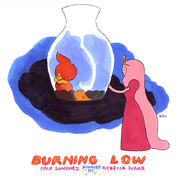 He's hanging out with Flame Princess!

"I thought I'd be ready for this."

For the first time.

For the second time.

Bird's eye view of the Treehouse

"Finn, what are you talking about?"

Snail in Burning Low (Top left)
Jealous.jpg
Add a photo to this gallery

e
Retrieved from "https://adventuretime.fandom.com/wiki/Burning_Low?oldid=289663"
Community content is available under CC-BY-SA unless otherwise noted.