"BMO"
Bunnies are animals that can be found in the real world. The first bunny that we see in Adventure Time is a minor character who appears in the episode "Jake the Brick". It is the main character in Jake's monologue story while he observes the day in a life of animals.

The bunnies that appear in the Adventure Time series appear the same as bunnies do in real life. Typically, we seen them with white fur. With the exception being Y5, who appears as a humanoid like creature. 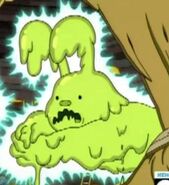