"Bun Bun" is the sixth episode in the eighth season of Adventure Time. It's the two hundred and thirty-first episode overall.[3]

Finn brings a special delivery for Cinnamon Bun to the Fire Kingdom but it may come with a dangerous cost. [4]

The episode begins with Cinnamon Bun, who is on diplomatic business, flying to the front gates of the Candy Kingdom on Jake 2, where he is greeted by two banana guards.

Cinnamon Bun heads up the Candy Castle to meet with Princess Bubblegum, who is expecting him. He gives her a get-well-card for Hot Dog Princess to sign. Finn can be heard entering the room, where Princess Bubblegum orders him to deliver it to the Slime Kingdom. After Finn leaves, Princess Bubblegum asks Cinnamon Bun to "catch up." They have a very brief conversation about life in the Fire Kingdom, where Cinnamon Bun appears uncomfortable talking about his new job and the lack of other candy people.

Cinnamon Bun then heads off, forgetting his keys, and runs into Chet and Crunchy. They ask him if he's still being a big goofball all the time. which leads to Cinnamon Bun flashing back to "The Enchiridion!" and cracking Princess Bubblegum's tower when he tries to do a flip. Cinnamon Bun is visibly embarrassed recalling who he was before he moved to the fire Kingdom. This exchange is witnessed by Princess Bubblegum, who's chased after Cinnamon Bun to give him his keys. She thinks to herself how hard it must be for him living in a place without any other candy people around.

A short time later, Princess Bubblegum summons Finn to her lab, where she's used remnants of old Cinnamon Bun experiments to form her newest creation, Bun Bun, a sort of "third cousin" to Cinnamon Bun. Princess Bubblegum asks that Finn deliver Bun Bun to Cinnamon Bun in the Fire Kingdom. She gives Finn a new fire suit; Bun Bun does not need one due to being fire proof. On their way there, Bun Bun ask multiple questions that such a young child would ask, and leisurely interacts with their environment, including some chipmunks. Finn declares Bun Bun to be "all right."

As Finn and Bun Bun approach the Fire Kingdom's entrance, Cinnamon Bun and Flame Princess walk out greeting the duo. Finn introduces Bun Bun to Cinnamon Bun as a sort of "Squire" for him, which impresses Cinnamon Bun. After Phoebe hears that Bun Bun is from Bonnibel, she runs security procedures, afterward letting her go with Cinnamon Bun. Just after they leave, Flame Princess stops Finn from leaving as well, inviting him to "hang out."

Cinnamon Bun is giving Bun Bun a tour inside the castle, however Bun Bun is causing a lot of mischief. This amuses the other the Flame People, but Cinnamon Bun is very embarrassed.

Meanwhile, Bun Bun rushes to the doors where behind the Flame King is imprisoned, before Cinnamon Bun can say anything to stop her. Bun Bun introduces herself to the Flame King, and after sharing exclaims they are now friends, which was held plausible by him. Cinnamon Bun tells her she is doing good, but tells her NOT to press the button that would release him, unfortunately she does so. Flame King rushes out to reestablish his forces and retake the Flame Kingdom. Cinnamon Bun then explains to Bun Bun that they need to go catch him.

Back over lunch, Finn and Flame Princess are playing charades, after which she brings up her fondness for "free style rapping," and Finn begins making a beat.

On the search for the Flame King, Bun Bun interrupts to show Cinnamon Bun her backflip(s), but misses the landing leading to Cinnamon Bun tumbling down after her. At the bottom of the hill, he states that the Flame King is near; he is unable to get up, and Bun Bun rushed off to his cave already. Inside the cave, Bun Bun catches the Flame King briefing his plan of invasion to the chipmunk residents, and informs him his plan will fail. Flame King agrees and contemplates what he should do, Bun Bun convinces him to become the "King of Chipmunks," and she will be the royal dog petter. At the edge of the cave, Cinnamon Bun has witnessed this and thinks to himself that Bun Bun is going to do great here, "Because you're brilliant." He then thanks a nearby ant for helping him get up after he fell down.

In the Fire Kingdom, Flame Princess is free styling and Cinnamon Bun joins in, telling them that Bun Bun taught him "how to have fun again." He also tells them the Flame King is loose through his lyrics. Finn and Flame Princess are shocked, but Cinnamon Bun explains that Flame King is now not a threat. Finn wonders if they should let him stay free, but Flame Princess notes how animals always brought out Flame King's gentle side, and perhaps letting stay with the chipmunks will do this again. Flame Princess considers this as a better alternative for his imprisonment. The episode ends with Cinnamon Bun reading a letter Bun Bun sent him (consisting of a blob of mud on a paper), sharing information of her new dog, which she's named "Cinnamon Bun." He smiles as he reads this. 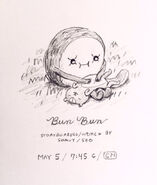 A room in the Candy Kingdom 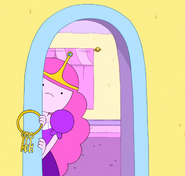 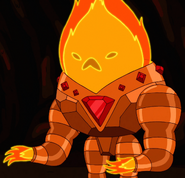