The bubble creator was built by Finn in "The Real You" after he equipped the Glasses of Nerdicon. It has the ability to create bubbles ranging from 1-D to 4-D. However, the 4-D bubble is totally incomprehensible to 3-D beings, such as the Candy People of Ooo. The 4-D bubble (being an entire dimension greater than its host dimension) collapses, forming a black hole. Finn impales the Bubble Creator with his Gold Sword, which warps it into a fourth dimension. He then performs a finishing blow on the black hole, destroying the Bubble Creator, the black hole, and his sword, and also saving himself and the Candy Kingdom. 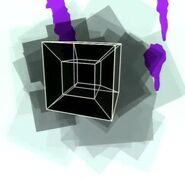 Finn's sword with the power of four dimensions
Español
Community content is available under CC-BY-SA unless otherwise noted.
Advertisement