Rae Gray
Bronwyn is the crossbreed daughter of Kim Kil Whan and Pat[1], who is first seen in a picture in "Ocarina." She appears again in "Wheels," where she demonstrates her proficiency and interest in skateboarding. Her latest appearance is seen in "Obsidian" where she is seen accompanying Finn to help Bubblegum and Marceline.

Bronwyn has yellow-orange fur, similar to that of Jake's. Her long hair is a light blonde color, like Lady Rainicorn's mane, and it conceals her right eye. She has her mother's bear nose and snout, but her father's eyes and rainicorn horn, which is shown in "Wheels" to be the main source of her teleportation powers, via lightning.

In "Wheels," Bronwyn dresses in a long blue-green dress with a white collar and buttons that reaches down to her knees. The dress has a lightning bolt motif on the front (likely a reference to her lightning powers). She also wears a skull shaped helmet, and white knee and elbow pads. For footwear, Bronwyn wears light green ankle length sneakers with white socks. Her shoes have white straps (one on each shoe) as fasteners.

In "Obsidian," she wears a grey shirt with a bolt motif, ripped pants, and carries a backpack and her skateboard. She also wears a red scarf around her neck. Her hair is noticeably shorter.

Bronwyn can be seen as an average teenager, putting up a cool front in the presence of her like-aged friends, while still being easily embarrassed and frustrated by her grandfather and father. Despite this, she does in fact care for both of them and takes her father's advice seriously. She has a definite interest in skateboarding, spending much of her time at home drawing board designs, and skating with her friends at a skate park in the woods.

Bronwyn is an amazingly skilled skater, and she also is shown to have the ability to teleport herself via lightning using her horn. Bronwyn is also a skilled artist, as indicated by her drawings of skateboard designs.

Bronwyn calling upon her powers.

Bronwyn picking up a single blade of grass. 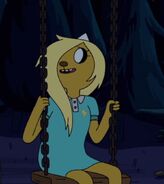 Bronwyn sitting on a swing set. 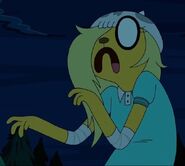 Bronwyn choking on a blade of grass.