"Broke His Crown" is the first episode in the eighth season of Adventure Time. It is the two hundred and twenty sixth episode overall.[2]

The episode opens with Princess Bubblegum and Marceline flying on The Morrow on the way to the Ice Kingdom in order to attend Ice King's dinner party. PB isn't very excited to go but Marceline ensures her that it will be fun and requests that PB address Ice King as Simon.

Upon arriving and sending The Morrow off, Ice King greets them both with a present as a bribe for coming. Marceline says that they don't need to be bribed into attending, and Ice King takes back the present. Gunter enters to offer red ice drinks. Marceline drinks the red from hers while PB's drink slides out of the glass and is wasted.

Ice King starts up a karaoke while Marceline gets a new drink for PB. As PB is about to start singing, Ice King wigs out while his crown sparks and circuitry lines pulsate red. PB yells for Marceline to come back and help Ice King, but Ice King is back to normal by the time she comes into the room, making Marceline think they were playing a prank on her.

Gunter plays a triangle to signal dinner being ready. Ice King serves them "penguin food" which are just different shaped food items. PB insists that something is wrong with the crown as she keeps seeing sparks fly out of it while Marceline insists nothing is wrong, and is shocked when PB calls Ice King "Simon" while inspecting his crown. Simon says to call him whatever as he enjoys this date being better than the last one. PB says that it is not a date, to which Simon replies "neither was the last one," it was a "robbery" with Betty stealing his heart and crown. This piques PB's interest, thinking the Crown has been tampered with.

Simon goes mad again, smashing plates with his head while Marceline watches in shock. PB uses a large icicle to knockout Simon as it would be easier to bring him back to the Candy Kingdom for study.

In PB's lab, an unconscious Simon is resting in a gurney while the crown is suspended in a tube full of wires and pink fluid. A reading comes out of the podium, which PB interprets as some abnormal activity of the crown. She heads over to a VR set which is connected to the crown, impressing Marcy who is curious as to why PB has never shown her the VR set before. PB says that she thought Marceline wouldn't like science, to which Marcy says she likes games.

They enter the crown, a large labyrinth with foliage everywhere and nothing around the outskirts of the maze. They enter and soon find Gunther, the dinosaur, playing bongos. He wonders how two newbies could get into the crown at once, thinking maybe they were skinny enough to fit in together at the same time. PB notices the walls are pulsating the same way as the crown was, changing the pattern of the labyrinth whenever it does. Gunther says it's been happening for a while and suggests that they go to the Professor, the smartest person he knows, next to Master Evergreen.

They walk around the maze, passing by a young looking boy in a dark gray shirt speaking in some sort of Scandinavian (likely Old Norse derived) language and an older looking man in a red suit listening. Gunther says that the boy is Sveinn, who only put the crown on once, and the other guy is some guy who calls himself the first "Santa" which excites Marceline, but PB has no idea who he is, nor cares.

They find the Professor, Simon, who is tinkering with the pulsating circuitry in the labyrinth walls. Marceline calls out to him and he runs to her, hugging her and asking if Betty has found a way to fix the crown. Marcy says no, the reason they are there is because of PB. Simon assumes she's Betty's assistant, which angers PB. Marceline diffuses it, stating that they are in the crown because it's going haywire, affecting Ice King in real life. Simon says he's been following the path of destruction left by the malware.

Gunther suggests a quest, leading the group around the maze. Simon apologizes to Marceline for the previous time he was in Ooo, focusing too much on Betty and not on her when Betty first came to Ooo, to which Marceline responds with cheerful understanding. He also asks if Marceline has a boyfriend. She laughs it off, saying that she did but she dumped him hard, and Simon wishes he had been there to punch his face. He already has, but didn't realize who Ash was at the time in "Betty," while Marceline reassures him that she can punch her own jerks, lightly punching Simon in the shoulder. He laughs it off while whispering "ouch."

The group walks past a corner and finds the source of the malicious coding: A disembodied head of Betty, which PB sees from behind and assumes is Magic Man due to the hat she is wearing. Betty reveals herself cheerfully, correcting PB by saying "Magic Woman," then continues to re-code the crown's circuitry walls. Simon runs up to her, excited to see Betty, while Gunther is underwhelmed. Simon asks what she's doing, and Betty says she's reprogramming the crown's wish magic in order to fix Simon. She exclaims "Aha!" as she enters a code which affects the Ice King in the gurney, causing him to put his feet in his mouth, and rearranging the world in the crown.

PB determines that Betty needs to be stopped before she causes irreparable damage. The groups tries and fails multiple times to capture Betty, who just keeps floating above and away to a different wall to keep on reprogramming. Simon suggests that a part of the real Betty must be in there somewhere, and Gunther helps motivate him to do something. He approaches her, telling her that he's the reason she's doing this, to which she responds "I'm busy." Simon tells her about the time they first met in a library and wanted to check out the same book. He let her have it, and she wrote a note to him. He remembers it fondly as a funny and witty note and begins to tear up. She continues to work and Simon cries that she can't help him like this. An angry Betty says she can and she will, addressing him as Simon. Simon, surprised that she called him "Simon" tells her to stay with that feeling. She snaps back to normal, and flies over to Simon to kiss him.

Marceline looks on in fondness as PB sees that the crown is stabilizing and reprogramming itself to push out foreign entities. Marceline asks if she can come back and visit Simon, to which PB says no. Betty asks about herself, and PB tells her she'll be deleted. Betty apologizes to Simon for almost destroying his world, to which he says that she is his world. Gunther says goodbye and hugs Marceline. Marcy says goodbye as well and says she'll be nicer to Penguins from now on. Gunther says "Okay!" then realizes he has no idea what she meant.

As PB and Marceline are beginning to disappear back to the real world, Betty announces she has something to tell Simon and starts to glitch. Marceline and PB are returned to the outside world before Betty is able to finish her sentence. PB checks the data printout, noticing remnants of Betty's code as a shadow print. Back in the crown labyrinth, Gunther is sitting by some bushes playing his drum while Simon and Betty are walking along one of the walls. Simon asks Betty's floating AI head what she wanted to tell him. She says it was just for dramatic effect if she was deleted so he would always think about her, but she remains, albeit with a glitched face. Simon doesn't mind and says he never could stop thinking about her as they kiss.

PB, Marceline, and Ice King are back at Ice King's palace with Gunter playing on the karaoke. Simon doesn't recall anything and concludes it must have been a great dinner party. PB agrees, saying it's the best she's ever been to, with a surprised Marceline looking at her. PB asks her why she's looking at her like that, saying she does not like relaxing but likes science. 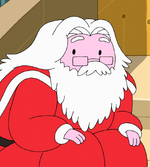 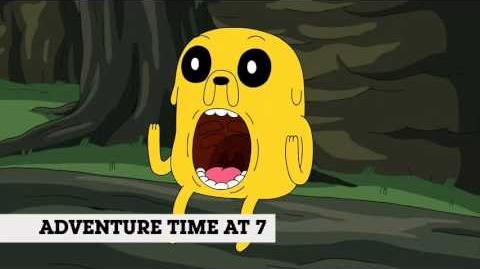 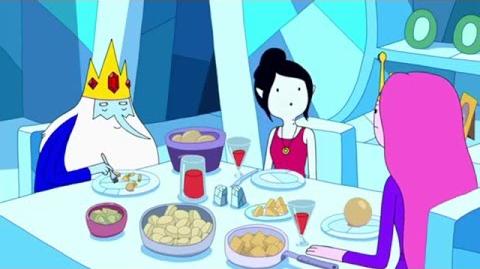 A town in the Crown's labyrinth 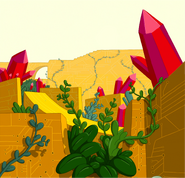 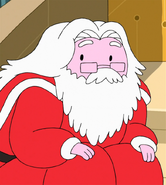 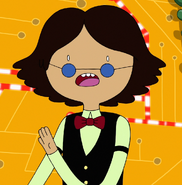 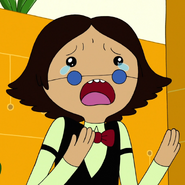 Retrieved from "https://adventuretime.fandom.com/wiki/Broke_His_Crown?oldid=836237"
Community content is available under CC-BY-SA unless otherwise noted.