Ashly Burch
Breezy is a bee who serves as Finn's wingman in the episode "Breezy." Breezy is originally attracted only to Finn's flower but soon finds that she has a crush on Finn as well. In the episode, she is a queen to be, and she shows that by drinking the royal jelly, she turns into a queen bee. She also uses this power to save Finn. Breezy also healed Finn's arm. This powers the flower arm so much that it grows into a large tree, which then explodes. Finn wakes up and breaks off the resulting branch, revealing an arm covered in honey, which he shakes off, revealing a fully-functioning arm with a small green thorn in the palm.

Breezy briefly reappears in her queen form in "Frog Seasons: Spring," when Finn and Jake pass her as she's showing bees how to gather pollen. However, they're too busy following a frog with a crown to stay and chat.

In "Frog Seasons: Spring (Again)," Breezy in seen panning for gold in a river for her friend, Honey Man. She gives the gold she finds for him so Honey Man can summon the crown the Frog Carrying Crown possesses.

Staring out Breezy takes on the standard appearance of a bumblebee, being bright yellow and black with tiny wings and a small black stinger.

However, his all changes after her transformation, as she keeps a similar color palette but becomes radically more humanoid. She grows two arms and legs, a long torso, and much larger wings that nearly touch the ground. 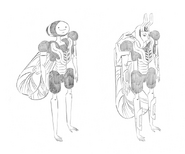