He has gone on two notable adventures: going down into the tomb of his grandfather to retrieve the peacocking hat and manual, and journeying into the Vapor Swamps to retrieve a soul stone whilst battling its monsters.

Braco has light yellow skin and light brown hair with sugar cubes in it. He wears a yellow T-shirt with a slight, thin line down the middle. He also wears brown pants and black boots. His appearance is reminiscent of that of the Banana Guard but in a more humanoid form.

Braco transforms into an ugly monster after making a deal with the demon Ogdoad, with half of his features enlarging. In exchange, Ogdoad put a spell making him desirable to any that looked at him.

Braco is and has always been infatuated with Princess Bubblegum, but not from any personal experience with her. He has been raised from birth to prepare to court her, inheriting his father's place in her line of suitors. Princess Bubblegum describes his pain for her as "the product of [Braco] overvaluing a projected, imaginary relationship" with herself.

Braco is very determined to achieve his perceived purpose as a suitor, and comes across as naïve and obsessed with the princess, even going so far as "peacocking" and taking over one of Finn and Jake's quests to collect the Soul Stone from a dangerous environment to impress her (a quest which becomes unnecessary, to his dismay). Braco apparently ignores his received injuries during this mission, and continues with his courtings, displaying unhealthy perseverance and a lack of self-care.

Braco seems to admire his father and grandfather who had tried to court the Princess before him, turning to the latter's copy of Mind Games when his initial courtings seem to fail.

Braco enjoys writing in his journals about his escapades, returning to his home. He is very romantic and dramatic, bringing Bubblegum flowers and believing that "love will win on this day" in regards to his being accepted by Peppermint Butler for a courting process. He jumps from her lab in the Candy Kingdom tower and lands on Mr. Cupcake, announcing "Meet me in the garden tonight, and unlock the mystery that is me!"

Braco ends up snapping, destroying the Soul Stone and assorted items on his journal desk, and he tells Peppermint Butler that he wants to throw in the towel. However, despite giving up he accepts Ogdoad's offer to turn him into a "walking love magnet" for a "price," and is ignorant of his resulting mutation, still pursuing his goal.

At the end of the episode, he gets with Princess Bubblegum Bot, the robot doppelganger Princess Bubblegum programmed to date him due to not wanting to watch him suffer and injure himself over her anymore. It is unknown if Braco and P-bot's relationship is successful, however, they left together happily at the end of "The Suitor."

Braco and his dead father. 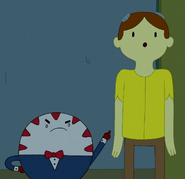 Braco in his grandfather's suit

Braco after making a deal with the demon Ogdoad
Español
Community content is available under CC-BY-SA unless otherwise noted.
Advertisement