The boomerang bottle is a green bottle that Finn throws in the episode "The Duke." It acts like a boomerang when thrown, and upon impact, it turns someone green and removes most of their hair. This may be an "ugly potion" of sorts.

The boomerang bottle is a green boomerang-shaped bottle with a cork for a cap. It also resembles the shape of a banana. Because of its shape, it functions as a boomerang.

Finn and Jake are throwing bottles from a wheelbarrow at a wall when Finn finds the Boomerang Bottle. He states that it looks stupid and wonders how it will fly. He throws it, but it changes direction and breaks a window in Princess Bubblegum's castle. The bottle hits Princess Bubblegum, turning her skin and hair green and making her nearly bald. Unfortunately, she thinks that the Duke of Nuts threw the potion and commands Finn and Jake to arrest him. 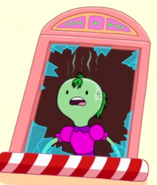 The Boomerang Bottle broke a window and turned Princess Bubblegum green and bald.

Retrieved from "https://adventuretime.fandom.com/wiki/Boomerang_bottle?oldid=811130"
Community content is available under CC-BY-SA unless otherwise noted.