Booboo Sousa was Joshua's forcefield generator to keep Bryce captive and away from stealing or attacking him.

Ever since Joshua passed away, Jermaine is in charge of Booboo Sousa.

In "Jermaine," Jermaine is seen having a watch that reminds him to slide down the cellar and switch the tape from front to back so that the forcefield would still stay on to prevent Bryce from escaping.

In the end of the episode, Jermaine was too late after Joshua and Margaret's house was burned down, and the forcefield had already turned off which meant that Bryce escaped in the process, he ate Booboo Sousa's face off.

Booboo Sousa needs to have its tape player on its back switched at a certain time daily in order to keep the forcefield generator casting out of the bear intact. The bear would always have music playing out of the tape players' speaker and once the tape is switched from front and back, the music would loop.

At first, Booboo Sousa was a force field generator inside a stuffed grey toy bear with spots on it. Currently, Booboo Sousa has its face ripped off due to Bryce eating it off at the end of the episode "Jermaine". 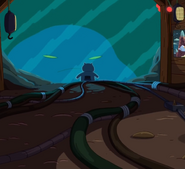 The forcefield from the back

Booboo Sousa's face eaten off by Bryce
Add a photo to this gallery
Retrieved from "https://adventuretime.fandom.com/wiki/Booboo_Sousa?oldid=811129"
Community content is available under CC-BY-SA unless otherwise noted.