"Little Brother"
Bonehead Beetles are a type of insect that can be found in the real world. This bonehead in particular appeared in the episode, "Little Brother," as a part of Shelby's party.

This bonehead appears to be purple. 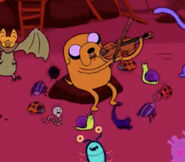