Cole Sanchez
Boilbee is the rude ghost from the grave next to Ghost Princess' grave in "Ghost Princess." Boilbee explains that Ghost Princess has been buried in the Cemetery longer than most of the other ghosts, and also that she goes around at night scaring people because she can't deal with her issues. Clarence throws a cheese-puff at him, and makes him go back into his grave by speaking affectionately of Ghost Princess.

His headstone has a rose carved on it. 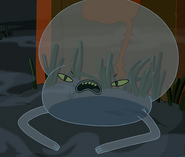