Start a Wiki
watch 01:42
Adventure Profile: Time Blenanas
Do you like this video?

Sam Alden
Patrick McHale
"Blenanas" is the ninth episode in the tenth season of Adventure Time. It is the two hundred and seventy-fifth episode overall.[2]

Finn's latest literary work is met with only derision, so he sets out to prove all the naysayers wrong.[3]

The episode starts with Finn in the tree fort examining the note Jake left behind at the end of "The First Investigation." As he ponders what the meaning of 'Brb' is, BMO approaches him and asks him what he's doing. As Finn explains, BMO assumes it's a love letter written in a secret code that Jake leaves for them whenever he leaves. As BMO says that they'll be right back, Finn remembers what the abbreviation means. BMO shows Finn all of Jake's past letters to BMO, all of them saying 'Brb. -Jake' on them. Finn notices a 'Ble' magazine on BMO's head and picks it up, stating he loves Ble. Finn goes to read some Ble until Jake returns, and BMO giggles at Jake's letters.

Finn is happily reading Ble on a massage chair in the treasure room, giggling. As he's reading the magazine, he comes across a page where the reader writes the caption and potentially mails it to Ble Headquarters for a chance to win in the next magazine. Finn writes down a caption and thinks that it's very amusing. After showing BMO and asking him what they think, BMO states that it isn't funny. Finn states that he'll prove it's funny by going to Ble headquarters and getting the caption officially published. He leaves,

The next scene focuses on the candy kingdom. Candy citizens are going about their normal day until Princess Bubblegum comes in with a hoverpad, megaphone, and energy gun. She starts blasting apart houses, stating that it's only a drill. She instructs the gumball guardians to put up some sort of forcefield before Finn comes into the scene along with two candy people. After Bubblegum states that she's taking precautionary measures for the good of her kingdom, Finn shows her his Ble caption and asks if it's funny. Princess Bubblegum states she has no time to lecture Finn on humor, and instead gives him a German textbook relating to humor and the subconscious ("Der Witz Und Seine Beziehung Zum Unterbewussten").

Finn is later walking on a trail, trying to read the cover of the book PB gave to him. He eventually gives up and states that PB is too smart to get his joke. He looks over his caption another time, giggling, before deciding that his caption could be understood by Ice King, who's desperate for Finn's approval.

The following scene shows Finn and Ice King in Ice King's house. After the two talk about the caption and bond over Ble, Ice King states that the people in Ble headquarters have lost their touch, and says that they should meet the employees face to face and show them the caption. Finn wonders where Ble is printed and Ice King uses his Demonic Wishing Eye to wish them there. They are transported to an odd, brightly colored, cloudy dimension with a colorful entity waiting for them known as 'Wishy'. Ice king wishes for the two to go to Ble, and Wishy teleports them.

The two end up in an ancient pre-war city, which is in a very poor state and has been mostly overtaken by swampland. Finn asks why Ice King simply doesn't always use the Demonic Wishing eye, and Ice King explains that it takes away a piece of the user's soul each time they use it. The two approach the Ble headquarters, and before they can enter, a pudding troll makes his presence known, blocking the two from entry. After Finn explains why they're there, the pudding troll states he's going to escort the two off of the property.

After a brief struggle with the pudding troll, he decides to let them into the HQ, with Ice King finding all his captions and pitches to Ble piled at the front door. Inside the building, all of the employees are long dead, having been dead for over 500 years, and Finn is saddened by this fact. Ice King says it's time they took over and calls in all his penguins from the Ice Kingdom to help revive Ble.

The penguins reactivate the machinery while Finn, Ice King, and the pudding troll work on a new issue of Ble. At the end of the latest issue is Finn's caption. The pudding troll states that he doesn't find the caption funny, and Finn finally accepts that it doesn't matter if his caption is funny or not, and admits that he just wanted to be a part of Ble. Finn suggests that Ble could possibly be rebooted by the three, but his idea is cut short by Ice King, who tells the penguins to destroy everything.

As Finn starts walking back home, he assumes that he just isn't a funny person and that the caption was funnier in his head. As he comes home to show BMO he got his caption published, he slips on numerous banana peels, trips on a large pile of gold, and is sent flying into the massage chair from earlier. BMO and NEPTR start laughing at the scene, and Finn smiles. 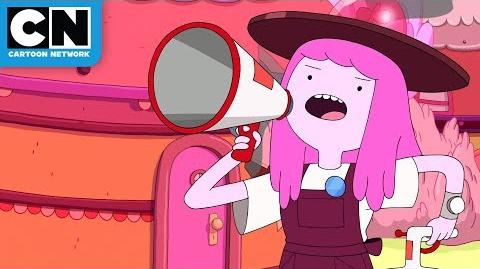 Retrieved from "https://adventuretime.fandom.com/wiki/Blenanas?oldid=828143"
Community content is available under CC-BY-SA unless otherwise noted.