"Come Along With Me"
Ble (or BLE) is the name of a comic series that has appeared in multiple episodes of Adventure Time, including the comic. Finn reads it at the end of the episode "Marceline's Closet" while lying on his bed. In "Incendium," when Jake searches through his pack for a gift for Flame Princess, one of the items he pulls out is another issue of Ble. Like the rest of the items he pulls out, it turns to ashes due to the intense heat of the Fire Kingdom. Another issue of appears in the episode "In Your Footsteps" in Finn's pack. It also makes an appearance in Graybles 1000+ where Jake is reading a copy of Ble whilst Finn is digging a hole for the Thought Cannon Wand.

The episode "Blenanas" focuses on Ble magazine. Finn reads a ble magazine and obssesses over a "you write the caption" segment, thinking his idea is really funny. Finn then sees Ice King and the two go to the Ble Headquarters to print their own copy of Ble. The headquarters was seemingly shut down before or during the Mushroom War, but Finn and Ice King use the equipment to print their own copy.

The cover varies by issue. The first one shows a cheeseburger with no arms that seems to be drooling, since there is a liquid on the floor and its tongue is sticking out. At the back of the book is a muscular blond-haired humanoid wearing only blue shorts. His legs look very small compared to the rest of his body. The word "HEY" appears at the top. Jake's issue in "Incendium" features the same cheeseburger floating in space near colorful planets and a sun.

In Issue 3 of the Adventure Time comics, on the last page of the story issue 3, Breakfast Princess is reading an issue of Ble. The cover has a face instead of the cheeseburger that appears on the last two issues.

A box of Ble cereal appears in a cart at the Grocery Kingdom in issue 20.

The comic's first appearance, as seen in "Marceline's Closet" 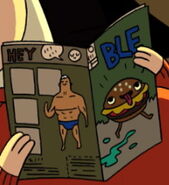 BLE magazine from the end of "Marceline's Closet"

Jake's copy seconds before it burns in "Incendium"

Jake reading the comic in Graybles 1000+

The comic in Blenanas
Español Français
Community content is available under CC-BY-SA unless otherwise noted.
Advertisement