Seo Kim
Somvilay Xayaphone
"Blank-Eyed Girl" is the nineteenth episode in the seventh season of Adventure Time. It's the two hundred and twentieth episode overall.[2]

One very spooky night, Finn and Jake come face-to-face with an urban myth.

Finn and Jake are at Pizza Sassy's, eating pizza, listening to the fifth anniversary edition of Starchy's paranormal radio show 'Graveyard Shift'. Starchy gets a call from a Banana guard, who reported a sighting of a blank-eyed girl, along with other caller reports of mysterious paranormal girls. Jake then gets uncomfortable, wanting to change the radio and freaks out, claiming that Starchy is just a sham. Finn finally gets tired of Jake being so uncomfortable, and pays for the pizza.

On the way home, they go through the forest. Finn and Jake goof around trying to scare each other, but then run home after hearing noises that neither of them made. They rush into the house, hide behind a door and hear something outside. They open the door and see the Blank-eyed girl is outside. They freak out, but regain their bearings, thinking that the girl might be lost and needs help. They open the door again but she is gone. Jake spots her in another window and freaks out.

They head upstairs and try to rationalize what's going on. Finn calls Starchy and says that they are seeing a black eyed girl right now, as Jake goes upstairs to get a better view. BMO sees Jake staring outside the window at a blank eyed girl and asks what he's doing, to which Jake falls in fear. Starchy tells Finn that he thinks the blank-eyed girl goes by old-school vampire rules, and cannot enter the house unless she is invited in. Starchy is wrong. He then says that she may be a fairy and should be given cream in a saucer. Jake pulls a saucer with cream from the kitchen and offers it to the girl, who licks his right thumb. Jake drops the saucer and cries. Starchy then prescribes that they play the clarinet, as the girl is a haint and will be repulsed by the noise. Starchy is wrong again as five more girls emerge from various parts of the Tree fort and dance to the tune. Jake stops and the girls stop. Starchy claims that the girls are actually un-dead and will be driven away by the gaze of a chicken.

Finn tries to dress up Jake as a chicken using honey to hold some feathers onto him, but Jake has had it and calls Starchy's show a bunch of made up baloney. They go to the library, with a blank-eyed girl behind them at the door. They search through books and find one called Creepy Stuff. They pull it out, and see Turtle Princess with black dyed hair and get scared. When they realize who it is, Finn asks if she knows about blank-eyed girls, which she does not, but uses her phone to search it up, reading that they are an urban legend that appeared about five years ago, the same time as Starchy's talkshow. Finn claims that they are Tulpas, physical manifestations of created by the mind and rely on people believing in them to exist.

Finn and Jake return home to see the girls, but Finn just passes them as if they weren't there. Jake is more frightened and obviously still not able to ignore them. Finn talks to BMO about how people create issues for themselves while Jake is surrounded by the girls while trying to think of pleasant thoughts, but all are corrupted by the girls. Jake concedes that they are creepy and they win.

The girls pop off their big contact lenses and take off their hair. Jake grabs a phone and is about to call the cops when the girls start turning their heads past 360 degrees and eventually pop off. They disrobe to reveal that their limbs and bodies are really just a suit. They are formless, almost like cloud people but they have no faces, and are much smaller and thinner. They fly out of the house and up to the night sky. Finn questions what they were, while BMO says that he thinks it was beautiful. 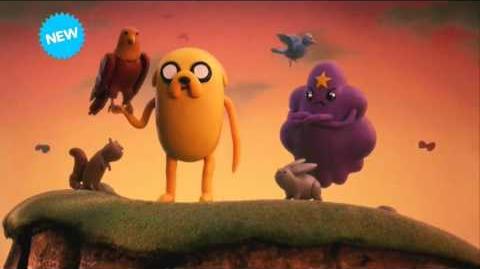 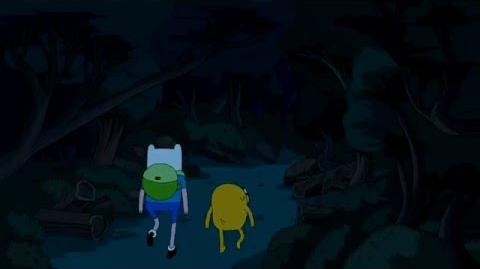 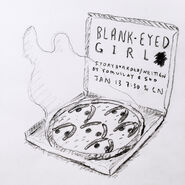 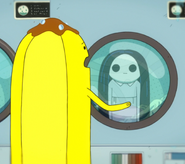 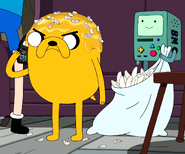