"Blade of Grass" is the forty-fifth episode in the fifth season of Adventure Time. It's the one hundred and forty-ninth episode overall.

When Finn tries to replace his broken sword with a grass sword, he learns the new one is cursed.

This episode opens with Finn and Jake fighting off some Slider Guys in an old playground. Jake notices Finn is struggling with his now-broken Demon Blood Sword, and Jake has to deal with the monsters for Finn. Jake informs Finn that he needs to get a new sword but Finn has grown attached to the sword that his father gave to him. Jake then tells Finn they should go shopping for a new sword.

Finn and Jake go through the shops and find a hut made out of grass. They find a mysterious man in there that offers them a grass sword. Finn declines but the man tells him that swords like that one were hard to come by. Finn buys it for $3 and is constantly impressed by the sword's accuracy.

Finn plays around with his new sword and becomes better at handling it. They visit Tree Trunks, now married, and Finn cuts an apple with his new sword. This scares Tree Trunks because she thinks the cut was "too perfect." Finn and Jake ignore her warning that the sword was cursed.

They get back to the Tree Fort and the two go to sleep. Finn has a dream in which he turns into a grass version of himself and floats off into the distance. He then takes the sword, which is now trying to attach itself to Finn, and kicks it into a river, claiming it was the worst three bucks he ever spent. He goes back home and the next morning while brushing his teeth, he notices the sword is back.

Jake wraps his apron around the hilt of the sword and sticks a long loaf of bread on the blade, so it cannot attach itself to Finn's body, and says they need to return it. They go back to the stores and see the grass hut is gone. A group of robbers is attacking Suzy and Sue's candle shop and Finn tries to fight them off without using his sword. He fails and uses his sword to cut off all the attackers' hair, and the robbers run away in fear. The hilt of the sword wraps around Finn's hand again, and Finn and Jake ask Choose Goose about the wizard who sold them the sword. Choose Goose tells them he lives on top of a hill and is the only one who can lift the curse.

Finn and Jake venture to the aforementioned hill, Finn using the sword's abilities to fight off enemies composed of grass (including a tardigrade, or "moss piglet"). Near the top, our heroes approach the wizard's home and, after destroying all the grassy objects thrown at them with his magic and tackling him, demand that he lift the curse. The wizard laughs in Finn's face, informing him that the blade will be with him for eternity. After a short pause Finn accepts this, stating that he is "cool with that," and the sword unravels back into his arm. The wizard is dumbfounded at his reaction to the curse and gets angry as he believes that was not the way to react to a eternal curse and stares as Finn ravels and unravels the grass sword. Jake observes that Finn, having accepted the sword, can now control it. The two run down the hill away from the house after shaking off the wizard's objections to their nonchalance. 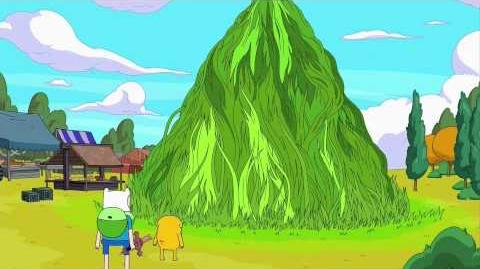 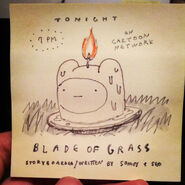 The Hooligans Who Love Candles before…

…and after Finn's grass blade haircut 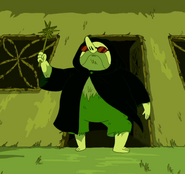 Finn, turned into a grass statue in his nightmare