Jesse Moynihan
Ako Castuera
"Billy's Bucket List" is the fifty-second episode in the fifth season of Adventure Time. It's the one hundred and fifty-sixth episode overall.

Finn finds the hero Billy's bucket list and decides to complete the unfinished items as a final tribute.[1]

The episode begins with Finn and Rap Bear having a rap battle in Candy Kingdom. After defeating Rap Bear, Finn tells Rap Bear that he is like his hero. Party Pat tells Finn that he thought Billy was his hero, but Finn tells Pat that he is dead. Finn then leaves the rap battle. While walking away towards the candy streets, he runs into Canyon, Billy's ex-girlfriend. Finn and Canyon went to Billy's Crack where they came across some fairies and what appears to be their king, a large fairy named Jordan. Jordan told Finn to go away as Billy's Crack was his home so Finn chopped off the Gnome King's head with his Grass Sword and the Gnomes carried his head and flew away. Finn and Canyon then found Billy's bucket list and try to complete it. The list consists of 3 items not finished by Billy before his untimely death caused by the Lich, including "Take Canyon on one last ride," "Tell Finn that thing," and "Lie on my back in the ocean. Just float." After Finn completes the first task he goes to the ocean where the Fear Feaster manifests from Finn's belly button. Finn knocks himself unconscious and falls into the ocean, and whilst doing so has a strange dream. When he wakes up he is floating on the surface of the ocean. The Fear Feaster reappears as Finn realizes that he's in the ocean, but Finn's Grass Sword kills The Fear Feaster of its own accord, despite him having said, "No mortal blade can harm the Fear Feaster." With the Fear Feaster gone, Finn no longer fears the ocean. A Billy constellation then tells him "that thing," thus completing Billy's bucket list. Billy tells Finn that he must go to The Citadel, where his father is still alive. The episode and Season 5 end on a cliffhanger with a view of The Citadel and a shadow of Finn's dad. 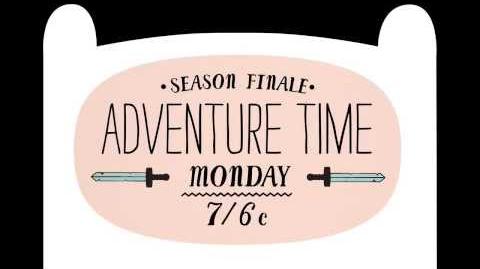 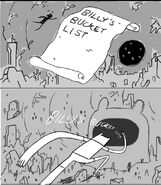 The first scene to show Finn's real dad, which concludes this episode and season 5.

Waving snail inside the sink