"Bespoken For" is the second part of the Adventure Time miniseries Elements and the third episode in the ninth season of Adventure Time. It is the two hundred and fifty-fifth episode overall.

Up in the Cloud Kingdom Finn and Jake look over Ooo to see that it now looks like "a four-way pizza" with each quarter being overrun by each element, fire, ice, candy, and slime. Finn and Jake then ask Ice King how it all happened.

Ice King recalls that after Finn and Jake left to visit the islands, Patience St. Pim had said she was looking for a magic battery to power an elemental purification spell. He was then visited by Betty. Betty talked about how she has done everything to cure him and return him to Simon and is trying a direct approach and asked if they wanted to go on a date.

Ice King then called the Ancient Sleeping Magi of Life Giving telling him about his date with Betty. Life Giving Magus told Ice King he needed a nice bespoke suit to wear on his date. The two wizards met up in wizard city and went to the tailor to purchase a custom made bespoke suit for Ice King.

Ice King arrived at Betty's house, which was previously Magic Man's house. Betty invited Ice King in and magically recreated a restaurant the two used to visit together. The two had dinner together, but Ice King didn't remember anything about Betty or the place. Betty was so frustrated, she tore the magical restaurant apart and zapped Ice King back to his castle.

Betty then confronted Ice King — even referring to him as such — and performed a magical spell for his amusement. Patience St. Pim returned, noting that the magic battery will suck, but noticed Betty's magic and was impressed. Patience froze Betty and was transported to a floor below, much to Ice King's confusion.

Patience St. Pim then brought in Princess Bubblegum, Flame Princess and Slime Princess — all of whom seem hypnotized or sleepwalking, though Ice King did not notice them. Ice King then went downstairs to see Patience as she chanted "elemental" with each of them in a quarter of a drawn circle. Ice King then noticed Betty frozen and entered the room. Patience then ordered the other elementals to blast him.

Ice King explains that after everything went nuts and there was a lot of light and noise, he left with Gunter. Ice King then says that the three together can rescue Betty. 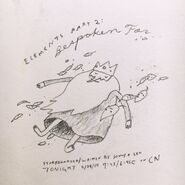 Bespoken For promo by writer and storyboard artist Seo Kim