Dee Bradley Baker
Bellamy Bug appears in Finn's imagination in the episode "Rainy Day Daydream." He speaks with a British accent and claims to represent Finn's secret desire to be civilized. He offers Finn a doily soaked in the tears of his daughter, who had just broken up with a gentle dandy. He is then smacked by Finn, who uses his imagination to turn the bug's arms into a robot arm and an octopus tentacle, which both proceed to pummel him. He is then carried away by a group of penguins.

Bellamy Bug is a light-green bug that has the same color as Finn's pack. He also has a dark green stripe in the middle. He wears an orange fedora adorned with a blue ribbon and a pink feather, as well as brown boots and a monocle. 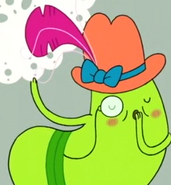 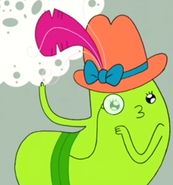 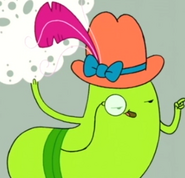