Maurice LaMarche
Bella Noche is a being of pure anti-magic and the main antagonist of the episode "Betty." It exists in another dimension and has the power to remove other people's magic. Bella Noche can escape its dimension by using a unique staff (in this case the staff of Stranson Doughblow), a sword, an orb, and a goblet arranged inside of a circle drawn on the ground.

In its "weak form," Bella Noche is nothing more than a large head made out of a green, slimy substance inside of a grey box. In its "powerful form," Bella Noche creates a black anti-magic box around itself, which absorbs the magic from other wizards. Inside of the box, Bella appears to be a slim, blue-skinned humanoid with long white hair. Bella also wears a long blue robe. However, it seems that anything inside Bella Noche's black box has a blue tint to it, making it possible for the being to have a slightly different color scheme than what is shown. In both weak and powerful forms, Bella Noche speaks in a deep and raspy voice. 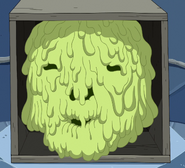