Bees are shown to vary in size from that of a large grapefruit to even the size of a small humanoid.

At the end of every episode of the elementals series, the bee that normally flies around the credits was revealed to have become assimilated with the fire elemental. It's black parts were now fire and it's yellow parts it now black. It has an angry expression on it's face. 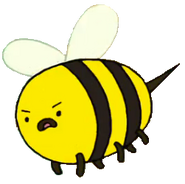 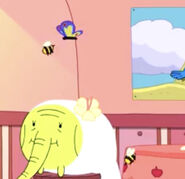 Bees from Tree Trunks (character)'s wedding
Add a photo to this gallery
Retrieved from "https://adventuretime.fandom.com/wiki/Bees?oldid=831988"
Community content is available under CC-BY-SA unless otherwise noted.