"Loyalty to the King"
Bee Princess made brief cameo appearances in the episode "What is Life?" and in Ice King's Imagination Zone, and also appears in "Loyalty to the King." She was not seen attending Princess Day, implying she is one of the unregistered princesses in Ooo.

Bee Princess is a bee that is the size of a human. She has two thin arms, as well as two thin legs. She has two black stripes in the front and back, and the rest of her body is yellow. Her face is light yellow. She has black antennas and a bee stinger on her butt. She has blue crystal wings and also wears a small yellow crown with a red ruby on it that can supposedly protect her from the Lich. 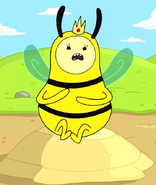 Bee Princess after falling on the ground 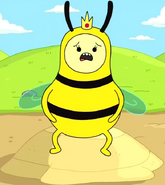