"Evicted!"
The Bee appears in the episode "Evicted!" when Jake, along with Finn, tries to move into its hive by forcing his foot into the entrance (during the House Hunting Song). The bee vomits honey on both of them to scare them away. Later, at Finn and Jake's cave party, the bee flies into Mr. Cupcake's frosting and gets stuck in it.

The Bee has the appearance of a stereotypical bumblebee, complete with black and yellow stripes, a pair of wings, three pairs of legs, and a stinger; however, it lacks any sort of antennae. 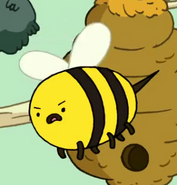 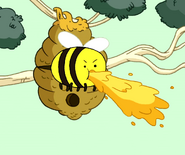