"Come Along With Me"
Bears are a species in the Land of Ooo. Most of the bears look similar to each other and look like normal wild bears. Party Bears, a subspecies of bears, look like teddy bears and like to party all the time. They are ruled by their chief, Party Pat.

At the end of the episode "Hero Heart" and at in the episode "Skyhooks II," two Candy Bears can be seen emerging from the woods and singing to Finn. The first one appeared to have a green, candy based body. He had a pair of red candy eyes, a blue candy nose, and three candy circles on his stomach positioned to look like buttons. The second one appeared to have a pink bod lay with chocolate covered bananas for arms/legs, a pair of blue candy eyes, and a red candy nose. The top of his body is covered in chocolate and he has two frosting buttons. 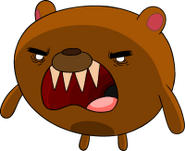 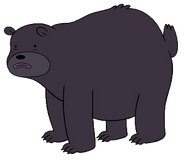 Retrieved from "https://adventuretime.fandom.com/wiki/Bears_(species)?oldid=838651"
Community content is available under CC-BY-SA unless otherwise noted.