Steve Wolfhard
Thomas Herpich
"Be More" is the twenty-eighth episode in the fifth season of Adventure Time. It's the one hundred and thirty-second episode overall.

Finn and Jake disguise themselves as MOs to infiltrate the MO factory and save BMO from malfunctioning.[2]

The episode starts with BMO hiding under a box. BMO brings up a file manager interface on its screen, and drags and deletes files. BMO seems to enjoy this, though it also seems to make it a little weak. BMO repeats this process, but accidentally selects and deletes coresystemdrivers.sys. Deleting this crucial program causes BMO to collapse.

BMO wakes up to see that Finn and Jake had found BMO and propped it up on some pillows. BMO, stuttering, explains that it needs to install new core system drivers, which they can find at the MO factory in the Bad Lands, where BMO was born. BMO leads Finn and Jake there, but warns them that damaged MOs get a full memory wipe before they are repaired, and Finn and Jake assure it they will not let that happen. BMO then explains that only MOs are allowed in the factory. Jake shape-shifts into a MO, and Finn pretends to be a MO by stuffing his head and arms into his shirt, exposing his stomach, placing BMO on his head to be the head. While Jake pretends to be JMO, Finn pretends to be FMO.

Finn and Jake request new core system drivers from the robotic MO factory receptionist. The MO receptionist then tells "FMO" to prepare for a full memory wipe. Finn backtracks, claiming that they had only visited the factory for nostalgic purposes. The receptionist then leads them on a complementary factory tour on a tram. On the tour, Finn, Jake and BMO spy the driver ports through which BMO can download its core system drivers. They jump off the tram, only to find that the B port (the only port compatible with BMO) is not there. The factory's security guards appear and shoot their vaporization guns at the three, who dodge out of the way just in time. Mistakenly believing that they have successfully vaporized the intruders, the guards leave.

The guards return to a staff lounge for small talk. Jake shape-shifts into one of them, carrying Finn and BMO on his shoulders. BMO explains that if it can connect to one of the guards' ports, it can hack into its computer and find where the B port is. Jake plugs BMO into one of the guards, recovering a map to the B port, and then the three leap out of Jake's disguise. They re-board the tram, with the security guards in hot pursuit. They follow the map to the B port, falling off the tram and crashing through several floors before landing.

The security guards fall soon after, brandishing their vaporization guns at the three, before BMO explains, "I am not non-MO. I am BMO." The guards gasp, and a voice asks, "BMO? Did I hear 'BMO'?" Finn, Jake and BMO look up to see an emaciated, atrophied old man, kept alive only by MOs. The man explains that he is Moe, the creator of the factory, as well as the creator of BMO. Moe assures Finn and Jake that he will not reset BMO's personality. Moe explains that he originally built BMO to take care of his son, but since he never had a son, he sent BMO off into the world alone, hoping that it could find a family of its own, maybe even find somebody else's little boy to take care of. Although he claims to have built a million robots, Moe says that BMO is very special: he built BMO to understand fun and how to play. He built BMO to be more—this is BMO's namesake. CMO hands Moe a back-up drive disk, which heals BMO. BMO awakens and runs up to hug Moe. Jake points out that although Moe claimed to have made millions of robots, he and Finn had only seen the receptionist and the security guards, and calls them jerks. Moe then leads them to a hatch, which opens to reveal a populous and diverse ecosystem of robots. Moe tells BMO to say hi to its family, and BMO immediately does. The other MOs say hi back to BMO, and BMO slaps its screen in happiness. The episode ends here. 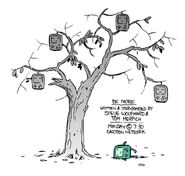 "What are you two goofs doing? Goofing?"

Waving snail in "Be More"

The millions of MOs 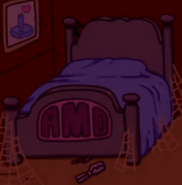