"City of Thieves"
The Baskets & Boots Owner is first introduced in "City of Thieves." He is a blue man that wields a fly swatter, apparently to keep thieves from stealing his baskets and boots. He is first seen sleeping at his post when he is woken up by Finn telling Jake not to steal from him. When he sees that Jake is trying to steal from him, he swats him away with his fly swatter and yells, "Hey! Go away!" It seems that he must have fallen asleep again, because later in the episode Jake is seen wearing boots he stole, which he later uses to defend Finn from Penny.

He is teal with cerulean hair and wears a tattered blue-gray shirt and a darker blue-gray hat. He has a small round nose and some facial hair. He also wears a gardening apron and a white glove on his left hand that he uses to wield the fly swatter. He has two teeth that appear when he talks. He also seems to be clean, so he might not be a thief. 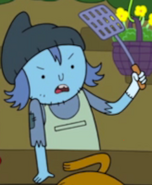 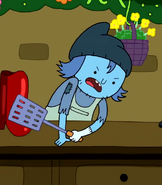 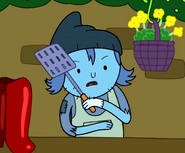 Add a photo to this gallery
Retrieved from "https://adventuretime.fandom.com/wiki/Baskets_%26_Boots_Owner?oldid=850906"
Community content is available under CC-BY-SA unless otherwise noted.