"Crossover"
Bartram, also called "Bar Bar", is the pet mule of Farmworld Finn. He appears in the episodes "Finn the Human" and "Jake the Dog". During most of the episodes, Finn calls him "Bar Bar." Bartram can apparently climb trees, as Finn finds him high up on a branch.

Finn's Mom tells her son to sell Bartram to the Destiny Gang so that they would stop threatening Finn's father, but he does not let that happen. Later, Farmworld Finn uses Bartram as a means to transport his mother, father, and his baby brother away from him because he thinks they are in danger from his newfound Ice Powers. In "Crossover," Bartram is mentioned again by Farmworld Finn, who briefly regains his sanity when he is possessed by the crown.

Bartram is a normal, brown mule with two long ears and dot eyes. He is often mistaken as a donkey. 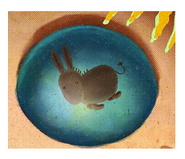