John DiMaggio[1]
Tom Kenny
Dee Bradley Baker (Banana Guard 2)
Tunde Adebimpe (Banana Guard 16)
Kent Osborne (in One Last Job)
Banana Guards are Candy People who guard Princess Bubblegum's Castle and Princess Bubblegum. The Banana Guards always appear in pairs prior to the episode "Princess Cookie," but due to their role in that episode, it's clear that there are a large number of guards that all wear the same banana peel armor. The last known leader of the guards was Root Beer Guy (prior to his death) after his predecessor, Captain Banana Guard, was either dismissed or demoted due to incompetence.

The Banana Guards wear armor that has them look like cut bananas with chocolate poured on top, along with some pieces of what appears to be sugar. They are taller than most characters as displayed when they tower over Princess Bubblegum. Their feet are popsicle sticks and they hold long bronze sticks topped with diamond-shaped gems that have similar color to the sugar like cubes on their head. While they look like popsicles, they are actually bananas that have popsicle stick legs. Early banana guards resembled plantains. Although most guards are shown to be male, a female Banana Guard is seen in "We Fixed a Truck" and multiple females are seen in "The Thin Yellow Line." In "Rattleballs" an Injured Banana Guard is missing the top portion of his armor which shows his head. This particular Guard appears to have black hair.

The banana guards also provide security for the Candy Vault.

Banana Guards have the responsibility of providing the basic emergency services for the Candy Kingdom, primarily in law enforcement. This is shown in "Apple Thief," when Tree Trunks calls the Banana Guards to turn herself in for stealing her own apples. When one answers the phone it says "Banana Guard speaking," suggesting that they don't have individual titles. Two are dispatched to arrest Tree Trunks, one of which makes the observation "this place could use a scarecrow" leading Finn to solve the mystery of the missing apples.

The guards also take part in specialized police operations for the Candy Kingdom. In "Princess Cookie," the Banana Guards are involved in a hostage rescue involving Princess Cookie. They act as if behind barricades and some are even laying on their sides for that purpose. One of the Banana Guards disguises himself as a horse to trick the hostage taker into coming out in a ruse, saying he will be allowed to leave without repercussion. Later in the episode, a large squad of them is sent to capture Princess Cookie; the guards move quickly and with picturesque coordination. They also arrive at the scene of the cookie's attempted suicide and take pictures, presumably for evidence.

The Banana Guards also provide fire and rescue services as shown in "Another Five More Short Graybles," where they attempt to extinguish the fire in Cinnamon Bun's house. However, the guards were unable to contain the fire as the episode later shows the Candy Kingdom ablaze.

Along with the Gumball Guardians, the Banana Guards are responsible for the kingdom's security and defense. They are shown to maintain a cavalry force as seen in "Reign of Gunters." Their unusual mounts resemble pink jellybeans with two stereotypical woman's legs and wear red heel shoes. They also have elite units with jet packs and insulated suits ("Reboot").

In "Come Along With Me," a new type of Banana Guard is introduced: Banana Guard 500s. These guards have large, round heads, grey visors with a radar attached, and a jetpack. They each carry a pink, flower-like gun and are planned to be used in the Gum War, but never fight due to Finn and Jake putting themselves, Princess Bubblegum, Gumbald, and Fern to sleep. A different-looking Banana Guard 500 appears floating next to the Prize Ball Guardian, around one thousand years in the future. It has two heads, one on top of the other, and the top head has a satellite dish attached to its visor, while the bottom head's visor has no such adornments. It also carries a more plain-looking (but still pink) gun.

The Banana Guards are generally portrayed to be notoriously incompetent in their duties. This is largely due to the fact that they, like most Candy People, are gullible and easily distracted. However, in later episodes this is revealed to also be due to the fact that "Banana Guarding is really boring". They demonstrate this in "Davey," where they chase after a jelly horse that was "disguised" to be Davey and a robber. In "One Last Job," the guards are quickly lured into leaving the Royal Candy Vault unguarded. In "Rattleballs," it was explained that Princess Bubblegum developed the robotic Gumball Guards because even the early (plantain) Banana Guards were "goofs," but eventually trashed the robots because of their violent nature. In "James II," the guards took a long time to realize that the James wearing all the medals (or in fact all of them) was the perpetrator. They were unsuccessful at trying to catch the Jameses while chasing them. The Banana Guards are basically used as comic relief characters rather than real guards.

The guards also have the intelligence of an average Candy Person. This creates problems as shown in "Root Beer Guy," where the guards were oblivious to Princess Bubblegum's fake kidnapping to test the Candy Kingdom's security, despite it taking place under one of their security cameras and the existence of multiple clues. Even after Root Beer Guy repeatedly tried to bring the case to their attention, they only investigated it after he "admitted" to the minor offense of taking a boat out late at night. This was enough to drive even Princess Bubblegum to disgust at their incompetence. Yet, their loyalty and reverence to Princess Bubblegum is strong enough that despite their failings, they will routinely act very bravely and place themselves in grave danger against far more powerful enemies ("Sky Witch", "Rattleballs", "The Dark Cloud", "Reboot"). Even after King of Ooo took control of the Candy Kingdom, the Banana Guards were the first to see him for what he was and revolt.

The Banana Guards also seem have stronger bonds to one another than other Candy People. In James II, this is shown when one of Guards got very teary-eyed when thinking about all having the same name since they all looked alike, like brothers. Also, in "The Thin Yellow Line", they were all willing to share Banana Guard 16's fate out of loyalty to one another. Despite similar appearance and voices, many of the Banana Guards have strong individual traits and personalities but tend to hide them because they had feared Princess Bubblegum would get rid of them ("The Thin Yellow Line"). This was due to legends created about Princess Bubblegum's actions in dealing with the Gumball Guards, her elimination of the Ooze Mutants, and even events as recent as her attempts to fix Lemongrab . Being that the Candy Kingdom is centuries old, some of these legends have become warped over time, gossip and probably from years of retelling the stories, painting Bubblegum into an almost goddess figure. However, after realizing that she was in fact proud of their individuality (perhaps since they had grown beyond the original reason for their creation), they began to regard her more like a mother figure by the end of "Thin Yellow Line". 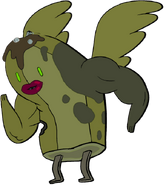 An Enhanced Zombie Banana Guard from "From Bad to Worse"

Banana Guards in "You Made Me"

Banana Guard on the phone 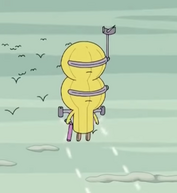