"Bad Little Boy" is the eleventh episode in the fifth season of Adventure Time. It is the one hundred and fifteenth episode overall.

The princesses are tired of Ice King's crazy Fionna and Cake stories, so Marceline stops by to show him how it's done.[2]

The episode begins with Doctor Prince running through the Candy Kingdom's forest, holding the Enchiridion in his hand, mumbling "Oh no!" repeatedly. It is revealed he is running from a gigantic Gunter on which Fionna and Cake are riding. Fionna commands Gunter to fire the laser cannon, and a pink bubbling laser beam shoots from his beak, knocking Doctor Prince to the ground. Cake congratulates Fionna and rewards her by feeding her a ball of spaghetti. Cake becomes aware that Doctor Prince has now recovered from the laser beam, claiming he is unharmed by the laser because he is a really strong guy and that he remembered to take his "Doctor Pills" that morning. He then retaliates by pulling a hanging dolphin from a nearby tree and throwing it at Fionna and Cake, narrowly missing them.

Fionna and Cake jump down from the giant Gunter and demand the Enchiridion from Doctor Prince. He throws the book at them while making monkey sounds and Fionna then thanks him for it in surprise. It turns out to be a bomb after Cake realizes it is. Immediately, Fionna throws it back at him moments before it explodes in a blast of confetti and streamers in midair. As they watch the confetti fall, the real Enchiridion opens in Doctor Prince's hand and Ice King emerges from a orange flame-like portal within. Slapping Doctor Prince across the face and leaving a hand-shaped mark, Ice King chastises him, and demands that he leave and never do wrong things again declaring he had been acting like a "knucklehead." Doctor Prince agrees, drops the Enchiridion and flicks a switch on his Dr. P belt, activating a jet pack which sends him flying upwards.

Fionna and Cake rush over to thank the Ice King as he pulls himself out of the Enchiridion. He introduces himself and describes himself as a really cool guy and returns the Enchiridion to Fionna. In her joy and thankfulness, she asks to be his best and closest friend. Ice King agrees and suggests they have a Best and Closest Friend Lunch, producing a sparking tray of "Mac & Cheezles" (Macaroni and Cheese) from behind his back, which elicits more compliments, hugs and "awww"s from Fionna and Cake. Ice King begins to cry in joy, overwhelmed that they are real. He tells them he wants to remember the day forever and stuffs a chunk of his macaroni in his pocket. Fionna tells Ice King not to be sad, backing away from him, as she explains they're about to go on a space adventure together. Cake then enlarges, lifting her butt upwards and. The giggling Ice King and Fionna both hop on Cake's back facing her tail. She lets out a flaming burst out of her muzzle and begins to blast off into space backwards.

Suddenly, Slime Princess's voice interrupts the scene, asking the Ice King to stop as the story is terrible. The scene cuts to Ice King's castle, with Turtle Princess, Slime Princess, Wildberry Princess, and Toast Princess all in cages being forced to listen to Ice King's stories. Ice King is sitting in his ice chair with his self-written book. They all complain about how bad the story is, and Wildberry Princess proposes that his story might be a new form of torture. Ice King defends his work, claiming that it is only a first draft, and that his story had everything: action, adventure, and a "hot older guy." He then insinuates that Wildberry Princess should have enjoyed that part, as she has a thing for "Silver Foxes" (older men). Wildberry looks at him with bewilderment and disgust as Ice King waggles his eyebrows at her rapidly while smirking.

Slime Princess interrupts the awkward moment by suggesting that the story would be better if it were a little more like real life, or if there were more romance in the story, which all the other princesses agree with. Ice King then refuses to listen to their suggestions, standing on the armrests of his chair and covering his ears. Suddenly his robe is blown up over his face, embarrassing Ice King. He pulls it back down, and is then lifted into the air and spun in circles by an unseen force, which also opens all of the princesses' cages. Ice King prays and apologizes to Gob, believing him to be the cause of the mysterious actions. Marceline then appears floating beside him, startling him with a simple "Boo."

Marceline floats and sits lazily on his chair smiling. Marceline admits that she has been listening in on Ice King's story for a couple hours and begrudgingly states his story was good, but thinks she could tell a better story. In a friendly tone she calls for the now-free princesses attention declaring she is going to tell a story.

Marceline's story begins with Fionna and Cake in their Tree Fort, and BMO sitting against the wall with an apple on its head. Fionna has two axes which she is swinging from side to side and then tosses at BMO, splitting the apple in half. BMO and Cake compliment her. Fionna thanks them and says that she needs to do something with her day, as Prince Gumball's missions tend to be lame. She spins around and throws her other ax at the wall, just as Prince Gumball arrives holding a tray of pink creams puffs in a bakery suit. The ax barely misses him, slicing through his hair. He disregards the accident, attempting to fix it and offers Fionna a cream puff as a reward for her most recent mission, which Fionna politely declines.

After arriving, Lumpy Space Prince declares he is going to sing a song for them and as everyone cheers, they get on a stage and prepares to sing a song for the crowd. Marshall Lee tells Fionna to follow her lead as he plays a chilled tune. As Marshall Lee did a move so did Fionna. Marshall Lee then shakes his butt. Fionna realizes what he is doing and pushes him saying "ay!" Marshall Lee looks at her and floats, strumming his bass, and singing. Fionna sings along with him as Cake grows from under her hat, making Fionna's long hair tumble free as Cake takes Fionna's shape and wears her hat and begins to dance with Marshall Lee. Marshall Lee hisses at Cake without her realizing and Fionna takes her away while Marshall Lee floats upwards. After Fionna puts her hat back on, Cake takes over singing as Fionna and Marshall Lee discuss whether Marshall Lee is bad or not, and why Fionna wants to spend time with him. Their discussion leads to playful fighting where Marshall Lee trips her up and she does the same. Marshall Lee begins to float sarcastically saying "oh no!" while laughing. Fionna elbows him in the stomach and Marshall Lee kicks her off making her slide to the end of the stage causing Cake to step in and break it up. Marshall Lee dismisses Cake, shoving her off the stage into the bushes while walking up to Fionna. Fionna rushes off in surprise and anger to check on Cake. Marshall Lee calls after her to give it a break because it was funny for him.

After Fionna checks on Cake they both agree to leave the party with Marshall Lee following behind, trying to get Fionna to come back, but his mistreatment of Cake is something Fionna would put up with. Marshall Lee gives up trying to get her to come back then grabs Cake from Fionna and flies in the sky saying "Unexpected!" and starts to laugh. In a fist and expression full of anger Fionna catches up with him where he flies off at a graveyard. He is standing on a giant tomb stone as he summons an army of skeletons with a flash of lightning. They help him fight Fionna and one to provide beatboxing for another song he begins to sing as she fights them off. He beatboxes the point that he is bad and not little. In disgust, Cake begins to enlarge and stretch away from Marshall Lee.

Fionna defeats the skeletons while a giant Cake and Marshall Lee's bat form fight with each other. Fionna rushes over and pulls Cake away from Marshall Lee grabbing a hold of her paws, causing him to fall over onto a spear protruding from the ground. He reverts to his normal form, moaning in pain as the sun rises behind him, burning his skin explaining what he feels is really bad. Cake provides shielding from the sun as she stretches in front of it. Marshall Lee states that this is it for him, and asks for Fionna to admit that she loves him before he dies. Fionna tears up as she angrily accuses him of messing with her head even at a time like this, and demands that for however long they have left, that he stop messing around and be honest with her.

Startled, Marshall Lee sits up admitting that he was not actually dying, that the spear missed him and stabbed the stolen cream puffs under his shirt, and says "you're, like, the realest person I've ever met." Fionna punches Marshall Lee on the cheek, laughing and crying at the same time as she advances on him with her fists raised, while Marshall Lee is screaming in panic.

Marceline ends her story proudly floating and crossing her arms, with all of the princesses agreeing that it was a much better story than the Ice King's version. The Ice King states that it was not as good and proposes other endings, but the princesses claim that they like how it is. The Ice King demands everyone to get out. He then wanders into the depths of his castle to a door sealed with a lock in the shape of Fionna's hat. Inside the room are stacks and piles of books surrounding over-sized ice sculptures of Fionna and Cake. The Ice King ends the episode by kneeling down to sparkling statues and praying, stating, "I know you're out there somewhere. I just haven't figured out how to get to you, but believe me, I will... I will..." 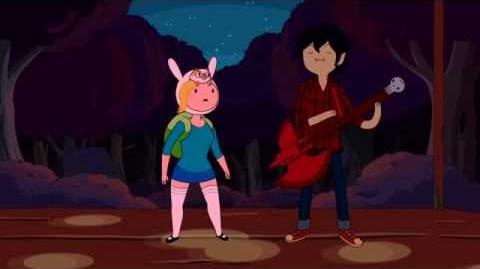 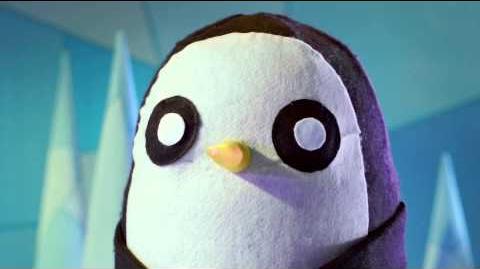 Storyboard
Add a photo to this gallery

"Yeah, but what if there was a little more romance in the story?"

"always picking a fight with me."

"Did you think that I was lying?"

"Haters! I'm not listening to haters!"

Retrieved from "https://adventuretime.fandom.com/wiki/Bad_Little_Boy?oldid=678227"
Community content is available under CC-BY-SA unless otherwise noted.