Tom Herpich
Skyler Page
"BMO Noire" is the seventeenth episode in the fourth season of Adventure Time. It's the ninety-fifth episode overall.

BMO tries to solve the mystery of Finn's missing sock.

Finn asks Jake where his sock is, but Jake denies taking it. They get into an argument when Finn asks Jake to help him look for it. At this point the colors change to black and white (like an old movie). BMO decides to find Finn's missing sock. Jake convinces Finn to go out with only one sock and BMO snaps a picture of Finn's foot as he leaves.

BMO notices Ronnie in the picture and grabs him for questioning. BMO spots lipstick on the back of Ronnie's neck and asks him about Lorraine. Ronnie warns BMO to stay away from her, but BMO assures him that they are "dinosaur bones." Ronnie then denies taking the sock, but points out a stain on Finn's other sock in the photo, saying that it looks like a grape juice stain. BMO goes into the pantry to check out the grape juice but it finds it is unopened and realizes Ronnie was lying. Suddenly, someone traps BMO by shutting the door. When the door opens, Officer Davis is standing there waiting for BMO. He tells BMO to stay out of police business and threatens to put BMO behind bars.

BMO, ignoring Officer Davis' advice (and threat), heads over to Lorraine's hoping that she can lead BMO to Ronnie. BMO asks Lorraine where the sock is, but she denies knowing anything about it. When BMO suggests that Ronnie took it, she laughs at the idea, saying that if Ronnie were man enough to take a sock she would not be spending her nights with Bebe. BMO asked if she was saying Bebe is man enough, but she denies it and says that Bebe does not know anything about Finn's sock. BMO catches Lorraine mentioning that the sock is Finn's and points out that she should not know any details of the case. Lorraine confesses that Bebe was the one who stole the sock. As BMO is leaving, Lorraine asks BMO not to tell Ronnie about her and Bebe, but Ronnie is hiding near the rafters.

BMO heads to Bebe's, a dance club downtown, and immediately starts stepping on Bebe and grilling him about the sock's location. Bebe denies knowing anything about socks, so BMO grabs some soot from a furnace and smears it on Bebe telling him that Lorraine sold him out. Bebe denies it and tells BMO that it was Ronnie who took the sock. BMO goes to wash the soot off of its hands, but when BMO gets back to Bebe to clean him up it finds out that he is dead and the police are arriving. BMO runs from the cops, but trips over one of them and falls down the Tree Fort's ladder, hitting its head.

While unconscious, BMO has a strange dream/vision which consists of POV sequences of BMO performing the actions of the 'characters' in the 'play.' BMO wakes up to find Neptr next to it. BMO asks Neptr if he had seen any cops down there. Neptr tells BMO that only they and Ronnie had been down there all day and that "about a sock's worth" of treasure was missing from that room. BMO realizes that Ronnie took the sock to carry the treasure, killed Bebe so he would not tell anyone, and pinned it on BMO.

BMO goes back upstairs to look for Ronnie, but finds a chalk outline of Ronnie with a ketchup stain in it instead. Officer Davis tells BMO that it is off the hook since they know Ronnie killed Bebe and took the treasure. Officer Davis hands BMO the confession Ronnie left and tells BMO to let the case go. BMO then notices that the note was written with lipstick and runs outside.

Lorraine is sitting on top of a barrel, with treasure, and floating in a pond. Lorraine confesses to framing Ronnie and Bebe and then reveals that the sock is in her and BMO's "secret grown-up kissing spot," to which BMO reacts with a giggle. Lorraine bids farewell, floats to the opposite side of the pond and jumps on to land.

The colors change back to normal as Finn and Jake return to the Tree Fort, with the Sea Lard. BMO shows Finn that his sock was in his pillow the whole time. Finn is happy that his sock is found, and he and BMO repeatedly say "Yay BMO!" After a short while, Jake asks "Our chicken's name is Lorraine?" BMO says yes and mentions that she is "red hot like pizza supper," and blushes as the episode ends. 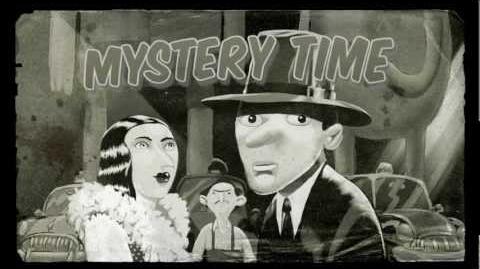 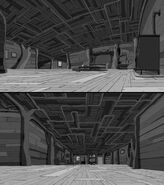 "Where is the sock, Lorraine?"

BMO's reflection(Not Football) of them washing their hands