The axe bass is an heirloom of Marceline's family. It was originally a battle axe before Marceline converted it into a bass guitar, which Hunson Abadeer calls "some kind of lute."

It makes its debut in "Henchman," where Marceline sings the "Fisherman Song" for the Peanut Baby. Later, she orders Finn to kill the Dimple Plant Monster with it, but he refuses. In the episode "It Came from the Nightosphere," she plays the "Fry Song" with the bass. When Finn summons her father, Marceline's dad seems surprised that Marceline has it and takes it from her. When he takes it, he used it as a brooch. In her efforts to reclaim it, she is shown to care somewhat more for the bass than she does for Finn, as she chooses to save it from hitting the ground rather than Finn.

It shows up in "Go With Me", where she was about to play it, until Finn interrupted her by his singing outside her house. It appears again in "What Was Missing" when she plays it during the songs "I'm Just Your Problem" and "My Best Friends in the World". It makes an appearance in the episode "Marceline's Closet," where Marceline plays it in "Journal Song." It's later seen in the episode "I Remember You", Marceline is briefly seen strumming on it before the Ice King enters her cave, she later plays it during the second half of "Remember You." Marshall Lee has an axe-guitar, which appeared in "Bad Little Boy". He used it to accompany the song "Good Little Girl."

In "The Music Hole" Marceline plays Francis Forever for Finn during the Battle of the Bands, also referred to as plan C. She is accompanied by Lumpy Space Princess and Death for her band, which includes: Marceline on bass, LSP on drums, and Death on guitar.

The Axe Bass has been seen destroyed multiple times. The first time is after her fight with the Vampire King (first seen in "Everything Stays," and the process is later in "Vamps About"); the second time is in Adventure Time: Distant Lands, in "Obsidian." In the latter episode, Marceline is shown playing "Woke Up", both in the past and present. Later, her bass is destroyed by a monster. Although she is initially livid, she decides that helping Princess Bubblegum out is more important and seems to accept what has happened.

It is an entirely red (except in "Henchman" the edges are silver), double-sided battle axe with two chips on the right side. The head stock was most likely added by Marceline, along with the machine heads, two on each side. The fingerboard has 13 frets. The pickups, also added by Marceline, appear to be single coils of unknown manufacture. The body has just two knobs (for volume and tone). In the Stakes mini series, Marceline was seen making tally-like scratches on the bass, each scratch representing a vampire she vanquished after staking The Fool in "Everything Stays."

Marshall Lee is shown playing a variation of the axe bass in the intro to Fionna and Cake episodes; however in "Bad Little Boy", he plays what may be an axe-guitar, as it has 6 tuning knobs for 6 strings. His axe-guitar has a head stock shaped like a skull and one blade. 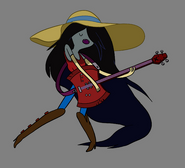 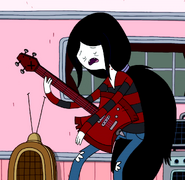 S2e1 Marceline And Her Axe Bass.png 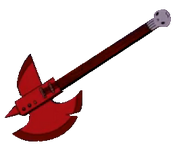 Marceline defeats Larvo with the bass

The Axe is destroyed