A large amount of animals appeared in the episode "Memories of Boom Boom Mountain." They were first used by the Marauders as cushions to keep their rough-housing less violent, requested by the giant crying Mountain Man. The Mountain Man didn't like the idea of using animals to soften the Marauders blows so Finn pets one of the marauders to get them to stop fighting. The Marauders and the animals become as obsessed as they were about rough-housing to petting each raw.

Two alligators can be seen tied up to a marauder's wrist along their backs. They both look exactly alike, but the one tied to the left wrist has darker scales. Their limbs are short, and their tails are almost as long as their bodies.

Five ducks appear briefly as one of the animals tied to a Marauders' body as an attempt to make their rough-housing less rough. They were tied up to the Head Marauder's left hand. All of them look alike, and have blue-green feathers around their neck.

The giraffe is an animal who makes a brief appearance, like most of the characters in the episode. It has a long neck and brown spots on its body. It can be seen among the animals petting Jake. It was standing on the piece of wood that Jake was laying on. It also made an appearance in "Burning Low" in Jakes dream.

The little rat can be seen on Jake's left arm, petting it. As its name implies, it is a small rat. It has white fur, a pink nose, long tail and tiny eyes. Its ears are round, unlike real rats, who have pointy ears.

The owl is a minor character who is seen among the group of animals who were petting Jake. It has brown feathers, orange eyes, and a light-brown belly. Its feet are orange. It has pointy ears unlike the cat's..

The seahorse is a small fish who made a small appearance. It can be seen among the creatures that have a party with Jake. It resembles a real sea horse, only it has pink skin with red stripes, and its snout is facing down. Its snout is rounded instead of straight and its bump is on its back instead of its belly.

The whale is one of the characters seen petting Jake. It is much smaller than normal whales. It has a round body and is dark blue with short flippers. Water can always be seen spouting out of its blowhole. Its tail is long and short compared to its body, which makes it vaguely resemble a walrus.

The whale tied up to a marauders hand 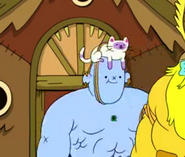 Add a photo to this gallery
Retrieved from "https://adventuretime.fandom.com/wiki/Animal_(Memories_of_Boom_Boom_Mountain)?oldid=799045"
Community content is available under CC-BY-SA unless otherwise noted.